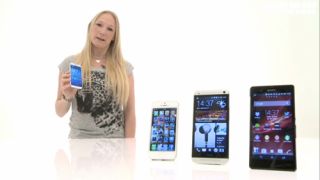 The S4 has kept the plastic design of its Galaxy predecessors, which will be a love it or hate it feature for many. Of course it allows the back panel to be removeable for expandable storage and exchangeable batteries, but it does mean it lacks the more premium finishes of its current rivals. We particularly like the HTC One’s full metal design, and while the Xperia Z does win points for its glass back panel, we prefer the curved edges to the One compared to the more angular design of the Z.

Smartphone screens seem to get bigger every year, and the Galaxy S4 has followed suit, with a 5-inch screen putting it on par with the Xperia Z, albeit in a smaller body. The iPhone 5’s 4-inch now seems rather small in comparison, and the HTC One cuts it somewhere in the middle at 4.7-inches.

There’s no doubt that bigger is better when it comes to the way we use our smartphones now, and as such, the iPhone 5 falls short of its bigger rivals in this respect. Even its once class-leading Retina screen has been beaten by its pin-sharp competitors.

The Samsung S4 has a huge 1.9GHz quad-core processor, which puts it top of the pack against the 1.7GHz quad-core HTC One, 1.5GHz quad-core Xperia Z and the dual-core 1.2GHz chip in the iPhone 5. Of course, while impressive on paper it’s the performance that matters and despite all that firepower, we did experience some lag on the S4. The other three multitasked without any noticeable stutters, so we’re hoping this is something Samsung can rectify with a software update soon.

The S4 runs on the latest version of Android Jelly Bean, while the Xperia Z and HTC One run on Jelly Bean 4.1.2. This is just an incremental difference though, and with their individual interfaces over the top, there’s no real differences of note.

Of the three Android phones, we like the HTC One’s minimalist styling of its icons, though the bright interface design of the S4 will no doubt be popular with many. Of course, the iPhone 5 features iOS, which still has the edge over Android when it comes to pure pick up and go simplicity.

Each handset has its own selling point, and the S4’s is almost certainly its wealth of extra features. While Samsung hasn’t tweaked its design much from the S3, it instead concentrated on packing the S4 full of smart features, like the ability to preview emails and photos with Air View and the built in S Health feature with pedometer and calorie tracker.

How useful these features prove to be, of course, will ultimately be down to the user. Elswhere, the HTC One features its Blinkfeed homescreen, packed with content customised to your liking, the iPhone has the power of its App Store, and there’s no worries of splashes and spills with the waterproof Xperia Z.

With more and more people using their phones to listen to music on the go, audio performance on a smartphone is more important than ever. And this is not a strong point for the S4. While it shows decent detail and bass weight, compared to the sharp, precise sound of the iPhone or Xperia Z, it feels a bit disorganised in its presentation.

The HTC One doesn’t quite manage to beat the headphone sound of the iPhone or Xperia Z either, but it’s BoomSound stereo speakers go someway to make up for this, with the best headphone free sound from the group by far.

As screens have got bigger, using our smartphones to watch movies has become a no brainer, and so video performance is key. The Galaxy S4 takes on the usual Samsung colour palette of being very bright and vibrant, but ultimately a little overblown, with whites coming across a little on the warm side.

The HTC One and Xperia Z fight this section out, and viewed straight on they’re both full of natural colour and sharp, clean lines. The Xperia Z falls down on viewing angles though, which become quite bad when viewed anything other than straight on.

When it comes to camera specs on paper, the Samsung tops the pile alongside the Sony Xperia Z with a 13MP sensor and stacks of features. But that doesn’t make them the best. The Xperia Z can produce images that look rather washed out and hazy, while the Samsung’s colours are a little overblown.

The HTC One features just 4MP but instead uses ultra pixels – bigger pixels that allow more light in for better low-light performance. We found this to be the accurate, with it out performing any of the others in these conditions, and with a recent update bolstering its performance in good light too. The iPhone still holds its own at 8MP, producing crisp images with natural colours, but can be open to noise when the light drops.

No longer just phones with some extra features, these mini-super-computers are fast, intelligent machines that are integral to everyday life now.

From playing high-quality music, videos and games to checking into flights and paying for coffee while you write up a review (ahem), smartphones are as much personal assistant as they are portable entertainment player. Occasionally, you can even call someone. But which is the best smartphone of 2013?

The surprise of the bunch was the new Samsung Galaxy S4. It's full of fancy tricks and new hands-free features, but disappoints in overall performance, both in terms of quality and smoothness of operation.

When it comes to music, there’s no toppling Apple. Despite concerns over its lack of innovation, the iPhone 5 still delivers the best sound quality, with its elegant finish, screen performance and intuitive experience still tempting buyers in the millions.

Sony's Xperia Z comes the closest to Apple for sound quality, and is a good choice for video. Despite the limited viewing angle, it's a clever machine and waterproof, too.

But our winner is the HTC One. Beating all other Android phones and inciting sly glances from even hardcore Apple fans, its sleek design, fine performance and stunning screen make this a superb smartphone. And that's why we make it the best smartphone to buy in 2013, for now...