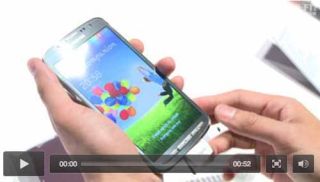 The Samsung Galaxy range of smartphones is now even bigger, after Samsung made the new Galaxy S4 Mini, S4 Active (video, above) and S4 Zoom official at the company's Premiere 2013 event.

Three new phones offer something different to the original Samsung Galaxy S4, whether it's a portable size, a more robust design or a 10x optical zoom lens camera.

But it's not quite that simple: the flagship, feature-packed specs of the Galaxy S4 is not replicated across all these phones. Read on to see the differences and take a look at our hands-on videos.

Clearly, the S4 Mini (below) is the baby in the pack – though it's worth pointing out that it's still bigger than the Apple iPhone 5, which shows how much bigger the Android phones are compared to Apple's iPhone. The S4 Mini is available in the same white or black finishes as the S4.

The S4 Active (below) meanwhile is all about the rugged, robust build, and sure enough feels more substantial – but in a good way in our minds. Dare we even say how the Galaxy S4 should have felt?

That 10x optical zoom sticks out like, well, a camera lens, but the S4 Zoom doesn't feel as heavy as you might think. The dimensions have been shrunk – it's shorter and narrower than the S4 Mini – so doesn't feel too heavy or cumbersome. A decent design job considering what's crammed in here.

The display on the Galaxy S4 was one of the highlights: bright, vivid and instantly impressive, if at times a little over-saturated.

None of the new S4 phones have the same screen. That's worth noting. The S4 Active (below, top) has the same size screen but it's a TFT display rather than AMOLED – and you could tell from the quick hands-on we had.

The S4 Mini (above) and S4 Zoom meanwhile have smaller, lower resolution screens. They looked pretty sharp, but, much like the Galaxy S3 Mini, we're primed for them being less impressive with video than Samsung's top dog Galaxy S4.

The good news is that the S4 Active seems to have the same power and speed at its disposal at the S4. Our brief hands-on certainly found a phone that seemed fast and responsive. That said, our S4 lag issues mean we weren't convinced by the original S4's CPU.

Sure enough, the S4 Mini (above) and S4 Zoom once more get less power. They're driving smaller handsets but nevertheless we'd expect a less rapid experience when really pushed by gaming or multi-tasking with video. Again, don't expect the full-fat S4 experience.

All four have SD card slots, which is a bonus – Samsung gave away 64 GB SD cards on the night as if to make a point – while internal memory on the new devices is on the small side.

The smaller batteries on the S4 Mini and S4 Zoom may not be too crucial due to the smaller screens, though it remains to be seen how the serious Samsung Galaxy S4 Zoom camera functionality impacts on battery life.

Release date and price information for the new S4 Active and Zoom are hard to come by, though the S4 Mini price has already been leaked online and it's set for a July release. The S4 Active is tipped for July, too, though it looks like the S4 Zoom could be more like Q3 2013.

We will be getting the new Galaxy S4 phones in for review to see how they stack-up compared to the original S4 just as soon as review samples are available.

MORE: Samsung Galaxy S4 vs HTC One vs iPhone 5 vs Sony Xperia Z