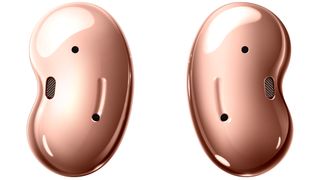 After months of leaks, Samsung has finally taken the wraps off its bean-shaped wireless earbuds, the Galaxy Buds Live. Their unique design sees the buds rest in your ears but they don't burrow into your ear canal, unlike traditional in-ears. They're also the first wireless earbuds from Samsung to feature noise-cancelling, making them rivals for the Apple AirPods Pros and Sony WF-1000XM3s.

Photos of the jelly bean-shaped Galaxy Buds Live were leaked back in March, but we now know more about the innovative headphones. Each bud boasts a bass duct on the rear and has a speaker opening at the bottom of each earbud instead of a more traditional speaker duct fitted with a silicone eartip.

According to Samsung, the active noise-cancelling is specifically tailored to the new design: "We developed Active Noise Cancelling for open-type, which reduces low-band background noise under 700Hz, such as busses and trains, up to 97% while still being able to hear noises around."

The Buds Live use AKG-supplied 12mm drivers and three microphones (two of which are beam-forming for a "significant boost" in call quality). Samsung's own Scaleable codec claims to be able to deliver consistent, high-quality audio streams, even when the Bluetooth signal is weak.

The Buds Live also showcase Bixby's voice wake-up function (which only works with Samsung Galaxy phones). It lets you summon Samsung's voice assistant without having to press a button – just say "Hi Bixby, check the weather/send a text message/play some music/etc" and it obliges.

Prefer good ol' fashioned touch controls? You can tap the buds once to play/pause a song, twice to skip it, or thrice to skip back to the previous track. Samsung's Galaxy Wearable companion app for Android and iOS allows you to customise the touch controls to your liking, as well as tweak EQ settings.

There's good news for gamers, with a Game Mode, which boosts audio latency to keep sound in sync when gaming on a smartphone. The Buds Live also get Fast Switching between devices and the ability to pair two pairs of buds with one Samsung Galaxy smartphone.

Finally, the Galaxy Buds Live feature Samsung's nifty ' Wireless PowerShare' feature, which allows users to charge their buds by placing them on the back of compatible Samsung devices, such as the Galaxy S20 range of smartphones and new Samsung Galaxy Note 20.

The Buds Live carry the same IPX2 rating as previous Galaxy Buds, so they should be ablet to survive a light rain shower.

The Galaxy Buds Live are available in three colours – Mystic Bronze, Black and White - and cost £179. Tempted? We'll be posting a full review of the Buds Live in the coming days.