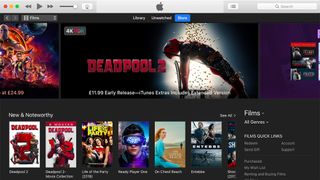 Amidst all the hullabaloo of the three new iPhones Apple revealed last night, the tech giant is coming under scrutiny not only for ditching the in-box headphone dongle, but also for a ‘catch’ in its iTunes Store policy.

A Canadian has taken to Twitter (under the handle @drandersgs) to express his frustration at Apple over the sudden disappearance of movies he previously bought from the iTunes Store.

When three bought titles vanished from his iTunes account, @drandersgs contacted Apple only to be told that they won’t be returned or refunded.

Written correspondence from a senior advisor at iTunes Store Customer Support, which @drandersgs tweeted with the line “@timcook when did this become acceptable?”, states that the content provider had removed those films from the Canadian Store and that they were no longer available to watch.

Rather than issue a refund, Apple instead offered two rental credits for the Store - compensation that, understandably, didn’t go down well.

So let it be known to users of the service that ‘buying’ films doesn’t necessarily mean you’ll get to keep them for life. If a studio revokes them, apparently it’s tough luck and you won’t be compensated - unless Apple decide to change its terms anyway.

It seems physical media has just got one up on streaming. Hug your Blu-rays close.