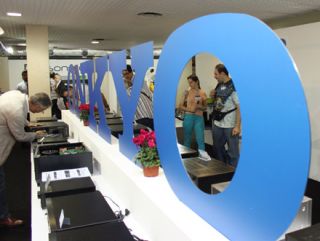 Onkyo was at MWC 2014 in Barcelona this week to reveal that it has signed a deal with Imagination Technologies, which will see the pair collaborate on future wireless music streaming systems, bringing with it High Quality Audio.

Imagination Technologies is the parent company of Pure, which has already unveiled its own range of wireless multi-room speakers in the shape of Jongo.

This new agreement means that Sonos, the American company founded in 2002, looks set to face much stiffer compeition in the wireless multi-room music streaming market.

From the deal, Onkyo will license Imagination's Caskeid and FlowCloud technologies. Caskeid features in the Jongo speaker system and allows app content to be delivered to multiple speakers using a combination of Bluetooth and wi-fi.

One Caskeid speaker is able to synchronise content with other speakers in the group. The technology claims to offer audiophile-quality stereo playback with less than 25μS synchronisation accuracy.

FlowCloud technology is also incorporated into the speakers. This allows the speakers to connect to the internet for product registration and updates. It also lets you access FlowAudio, a cloud-based music and radio service.

Because Onkyo and Pure speakers both use the technology, they can be partnered together and allow users choose from a wider range of products than currently in the Sonos range.

Munenori Otsuki, president and CEO of Onkyo Corporation, said of the collaboration: "By working with Imagination and its partners, we will agressively expand wireless audio music streaming and High Quality Audio out of Japan to the rest of the world."

Pure says 57 per cent of consumers listen to music on their smartphone, but just 1 in 5 share it with another device. That suggests that the market for wireless audio products is wide open, and the battle between rival firms seems to be hotting up.