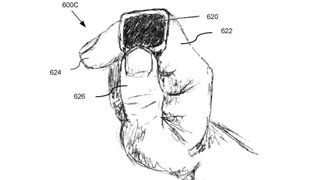 Apple has reportedly been considering a smart ring since at least last October, when an initial patent for a ring-worn device was published.

And now, the Cupertino giant has filed another patent for such a device to include point detection. So when a user performs a function on the ring, they may now be able to point at their other devices to make them bend to the ring's will. (One ring to rule them all, eh?)

Yesterday, Apple and the United States Patent and Trademark Office (USPTO) published US patent 10,627,902, a 40-page document that suggests the device could control whatever Apple product the wearer is gesturing at through gesture controls. If they wanted to play something on the Apple TV streamer, for example, they might simply be able to point their ring-wearing digit at it.

The patent also lists gesture controls for other home appliances, including changing the temperature of a room or the brightness of lights, suggesting that the Apple Ring (if that is to be its name; the patent doesn't specify) could interact with smart home products, not just other Apple devices.

The patent also notes that the dinky wearable could use a touchscreen, physical dial or voice control to interact with other devices. Our friends over at TechRadar have noted that commands might be transmitted through near-field communication (NFC), which of course the company already harnesses for Apple Pay.

Apple Insider has speculated that Apple's updated smart ring patent could be the firm's more adventurous plan for its U1 chip, which debuted on the iPhone 11 and iPhone 11 Pro and facilitates speedier selection of an U1-enabled iPhone during AirDrop transfer. Apple owners could, therefore, point their U1-enabled Apple Ring at whichever device in a room they wanted to control.

Might it just turn out to be a miniature Apple Watch? Might it never even see the light of day? Naturally any number of alterations could be made, or the plan may of course be scrapped altogether. If this updated patent is to be believed and seen through, however, the Apple Ring could actually be a much more intuitive way to control your devices. Imagine being able to circle your finger clockwise to increase your TV's volume, for example. Smart.

Here's how to watch Apple TV+ shows for free