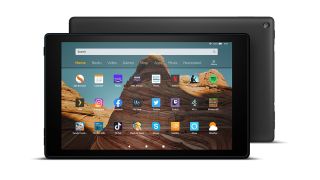 Amazon has today announced an all-new version of its flagship Fire HD 10 tablet, which builds on its predecessor’s Award-winning value with a faster processor, longer battery life and extra features for the same £149.99 price tag.

The HD 10, named for its 10.1in display, promises faster operation thanks to an octa-core processor and 2GB RAM, as well as 12 hours of battery life – up from 10 hours. Internal storage (available in 32GB or 64GB) can now be expanded all the way up to 512GB (up from its predecessor’s 256GB limit) via a microSD card, too – and remember, there’s free cloud storage for media on the tablet.

While we’re on the subject of battery, Amazon has also hastened the charging process with the supplied USB-C charger.

A new picture-in-picture mode has been introduced in the name of multi-tasking, too, allowing users to, say, watch videos while also browsing the web or scrolling social media. Amazon has also improved the wi-fi support for stabler connectivity.

Much else on the feature front stays the same over the 2017-introduced variant: the screen boasts a Full HD 1080p display, there’s Dolby Atmos for enhanced sound through the stereo speakers, and the rear camera is 2MP (the front snapper, meanwhile, is now slightly better spec’d). Alexa is, of course, at your command for controlling music and video playback, launching apps and asking questions using your voice.

The kiddywinks-friendly version of the company’s top-tier tablet also enters a next generation version today. The Fire HD 10 Kids Edition (£199.99) is essentially a Fire HD 10 optimised for children’s use. To that end it boasts the same specs but is wrapped in a kid-proof case with a new adjustable stand in blue, pink or purple colourways. A two-year guarantee should ease parents’ minds, as should fully-fledged parental controls allowing them to manage use and view daily activity reports of their children’s tablet usage.

The year of Amazon Fire for Kids Unlimited supplied with each purchase grants them access to thousands of books, videos, educational apps, and games. The supplied USB-C charging cable is interchangeable, too, making it easier for them to plug it in.

The Fire HD 10 Kids Edition is also available to pre-order today, with shipping expected on the 30th October. A good time to bag the older model at a discount? You bet, it's now £169.99.