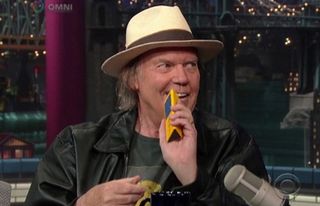 PonoMusic, the high-resolution music service backed by musician Neil Young, is set to launch this week with a Kickstarter campaign that will allow users to reserve a PonoPlayer, the company's high-res music player.

A press release leaked ahead of the launch offers a few more details regarding the service, initially announced as Pono but now seemingly realised as PonoMusic, the download store, and PonoPlayer, a portable music player.

The PonoPlayer promises to be "a high-resolution music player designed and engineered in a 'no-compromise' fashion".

It will have a 128GB memory, which the release claims can store "1000 to 2000 high-resolution digital music albums", though this should presumably state tracks rather than albums.

It wil also support a memory card so you can expand that relatively meagre storage capacity. The PonoPlayer will cost $399 in the US and will go on sale via PonoMusic.com and Kickstarter on March 15th. There's no word on UK pricing as yet.

The release reports the PonoPlayer has been built in conjunction with Ayre Acoustics, a US high-end AV company, with the Computer Audiophile forum reporting more details on the internal workings of the high-res music player. These include an Ayre custom designed and implemented digital filter and the use of an ESS ES9018 DAC.

As well as the portable music player, which looks set to retain its eye-catching angular design, the release promises "PonoMusic recommended earbud and headphone products".

PonoMusic itself continues to promise "the highest-quality digital music" from major and independent record labels, without DRM according to reports, plus a Pono desktop music management application.

This will allow you to manage your music and transfer your files from your PC to your player, and promises to work with other high-res music players, presumably including the likes of the Astell & Kern AK240 and the Sony NWZ-ZX1.

We first heard about Pono back in September 2012, when Young debuted the yellow Pono music player on The Letterman Show, promising his new service would "save the sound of music".

We then exclusively revealed Young was talking to Meridian about the idea, though Meridian's continued involvement is now unclear.

At the time, Linn Product's managing director Gilad Tiefenbrun said the Pono project would lead to "ridicule and failure".

Concrete news on exactly what Pono entails has been thin on the ground since but the launch of the PonoMusic Kickstarter campaign is set to be announced at SXSW, the music and technology conference taking place in Austin, Texas this week.

The news comes as HDTracks, the US high-resolution download service, prepares to launch in the UK and Europe at the end of the month.

MORE: 10 of the best AV products on Kickstarter