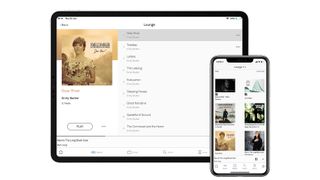 Linn has just launched an all-new control app for its entire range of streaming-enabled products, the latest of which include the Series 3 wireless speaker, Selekt DSM streamer and recently announced Kustom DSM multi-zone network player.

The straightforwardly named Linn App expands on the usability and features of the British hi-fi company's Kazoo control app (which customers can continue using, by the way) with a number of new features.

The Linn App introduces a universal search tool that bings up search results across streaming services and stored music. Search for 'David Bowie', for example, and it'll bring up Bowie tracks and albums both on your NAS drive(s) and the libraries of services, such as Tidal or Qobuz, you're logged into.

Playlists are now stored in the cloud, too, allowing anyone with a Linn account to access them from anywhere and play them on any Linn DSM network player.

While the new app should be very familiar to existing Linn customers who use the Kazoo app, Linn has tweaked the interface so that browse, search, queue, room selection and system setting tabs are always on screen for easier access at anytime.

The Linn App is now available for iOS users to download on the App Store, while an Android version will follow at a later, yet-unspecified date.