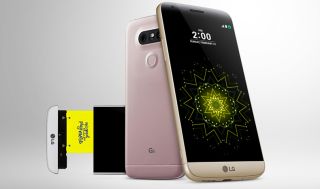 LG wants the G5 to make smartphones exciting again, and hopes to do so with a 'full metal unibody' phone that comes with a 'modular type' design for upgrading components, from the slide-out battery to the DAC.

Launched alongside the LG G5 was the Hi-Fi Plus DAC, designed with Bang & Olufsen and supporting 32-bit 384kHz high resolution audio and DSD playback. It can be used as a module with the G5 phone or as a standalone DAC. The G5 also supports aptX HD and Dolby Digital Plus audio.

As well as the DAC, the G5 will be offered with a set of B&O H3 earphones and there's a new LG Tone Platinum (HBS-1100) Bluetooth headset, built in partnership with Harman-Kardon. The headset is the first to support aptX HD, compatible with 24-bit wireless audio.

As well as the Hi-Fi Plus DAC, LG announced a whole host of 'LG Friends' companion devices.

Elsewhere on the G5 phone itself there's a 135-degree wide-angle camera lens, an 'always-on' display, and that metal and glass body design.

Available in silver, gold, pink and 'titan', pricing and release date information is set to follow.