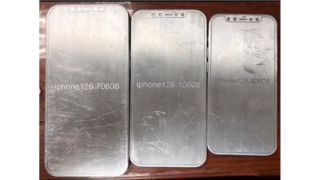 We wouldn't call it silly season, but the summer season of rumours ahead of the end-of-year iPhone 12 launch has definitely begun. And if you're interested in the latest thinking on the new iPhone's design and features, it's worth paying a little more attention from about now.

The latest iPhone leak that seems worthy of our attention potentially gives us a big clue to the design. And it certainly looks familiar. Jin Store, an Apple premium reseller from New Zealand, has posted a series of photos online, allegedly showing molds of the new iPhone.

The sides are squared off, just like the rumored #iPhone12 #iPhone12Pro pic.twitter.com/u2lg4pcxSVJune 14, 2020

The key takeaway from the pictures is the squared off sides, similar to recent iPad Pro devices, and harking back to the angular iPhone 4. This could mean an easier to hold, less slippery casing, as has been requested by some iPhone users. They also show a Lightning port and are accompanied by CAD drawings of the potential rear camera design.

This information also points to Apple releasing four iPhone 12 models, with a new 5.4-inch entry-level iPhone 12 below the 6.1-inch design while an iPhone 12 Pro and iPhone 12 Pro Max would be larger still.

These molds would typically be used by phone case manufacturers and this leak certainly matches some previous rumours on the shape and size of the iPhone. That said, as always, iPhone rumours should be taken with a pinch of salt, especially from less well-known sources, such as this one.

Talking of pinches of salt, how about a foldable iPhone? A more reliable, regular iPhone tipster, Jon Prosser (who earlier this year leaked alleged iPhone 12 prices and sizes), has confirmed Apple is working on a form of foldable iPhone design.

Rather than a display that folds in the middle, this would in fact have two separate displays around a central hinge, allowing the device to fold. "Even though they’re two separate panels, when the displays are extended, it looks fairly continuous and seamless," he adds.

This is clearly at the prototype stage, with no guarantee that it will ever become a reality.

LG and Samsung have both delivered foldable phones and tablets with various designs and varying degrees of success. The Samsung Galaxy Fold was plagued by reports of it breaking, while the LG G8X dual-screen phone seemed to fade to obscurity after launch, though a similar dual-screen V60 phone emerged this year.

Of course, Apple doing something similar would no doubt attract far more attention. But if it does happen, we're talking iPhone 13 or iPhone 14, so a few years yet.

Despite rumours of production delays, no surprise given the Covid-19 situation around the globe, we're still expecting an iPhone 12 launch event at the end of the year - even if it might be a little later than the usual September date.