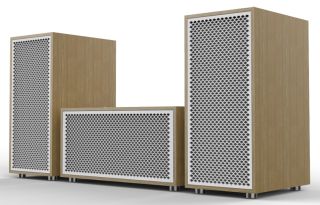 SuperTooth, a specialist manufacturer of Bluetooth accessories, enters the multi-room music market with its aptly named Multiroom System (above). It can stream stereo audio to up to five wireless speakers using a combination of Bluetooth and RF.

Users simply need to pair their smartphone, tablet or computer to the base unit via Bluetooth, then the base speaker communicates with up to four satellites using proprietary RF wireless technology.

Music can be streamed from any number of apps including Spotify, Deezer, YouTube or Pandora, as well as any device's own music library. There's a multiroom app that's compatible with Android and iOS devices, and which can be used to name each speaker to identify the room it's used in.

A three speaker configuration (base unit plus two satellites) will cost $299, while the five-speaker set-up costs $480.

This compact digital amplifier from Griffin has been upgraded to include aptX Bluetooth streaming and sells for $149. Its name comes from the fact that it delivers a claimed 20W per channel.

It can be used with your existing speakers, or alternatively can be bundled with NHT SuperZero bookshelf speakers for $300 or for $600 comes with the NHT SuperZero 2.1 package including a separate subwoofer.

An optical input allows connection of external devices such as an Apple TV, games console or Apple AirPort Express.

Fancy a bigger screen for gaming on your PC? Then check out this curved, 34in HD model from Westinghouse. It promises a more immersive experience for the hardcore gamer and would look smart on any desktop. Price tbc.

There will be no shortage of speakers here at CES, but this 'floating' design certainly caught our eye - and won itself a CES 2015 Innovation Award.

Claimed to be the first of its kind, the Air2 Bluetooth speaker hovers above its base and is said to deliver a "punchy sound". We couldn't actually hear it in action, as the display models were in a perspex case. But the novelty of it appeals.

OK, the headline might be misleading as you can only wash the removable cloth headband. But it's a nice touch.

And touch is what these Plattan ADV wireless Bluetooth 4.0 headphones are all about. The earcups have a built-in 'swipe' control enabling the user to adjust the volume, change tracks or answer a phone call using simple gestures.

Swipe down on the outside of the earcup to decrease volume, swipe up to increase it, swipe backwards for the previous song and forwards to select the next one. A single tap will play/pause the music or answer a phone call, while a double tap will end the call.

A full charge of the battery via USB should give up to eight hours of playback, and the headphones can be paired with any Bluetooth device up to 10 metres away.

UrbanEars says its first range of wireless cans will be available in June in a range of ten snazzy colours.