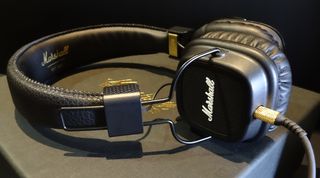 Harking back to the iconic Marshall amps and looking to improve on the original Marshall Major cans, the Major II headphones are set to launch worldwide later this month.

Marshall claims customised drivers deliver deeper bass and a more refined midrange, while there's now a detachable cable with connection ports on both ears, so you can choose which side to wear the cable, and an L-plug end for connecting to two sets of cans simultaneously.

The cable has a built-in microphone too.

The more rounded and supposedly more durable design also has improved hinges so the ears can fold-up in to a more portable unit and also rotate more easily.

The Marshall Major II headphones are due on sale by the end of January and will cost £100 in the UK, $120 in the US.