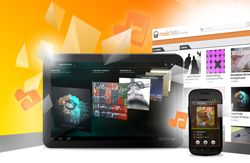 That's according to the Wall Street Journal, which is reporting sources close to the company's plan who say the home entertainment system would be a more affordable version of what Sonos and others currently offer.

As well as marking a change in Google's focus, which until now has been on the Android software platform and mobile devices rather than hardware, it would also see the company competing with familiar foe Apple in a new area.

Apple of course already offers products such as Apple TV, Airport Express and of course the AirPlay wireless streaming technology found in an increasing number of iPod docks and other devices.

Sources suggest that the Google wireless media system would stream music from Google's cloud storage service – Google Music – and be controlled by Android-powered tablets and smartphones.

Google's acquisition of Motorola Mobility is another sign that the company has its eyes on hardware as well as software.

The company has already made a move in to the living room with 'Google TV'. The streaming video platform has had a stuttering start in the US but new boxes and TVs are set to be released in the UK this year.

"Think about your home as a network of accessories and think of Android as the operating system for your home, a vision called 'Android @Home," he said.

Sonos is an obvious competitor in this market and co-founder Tom Cullen told the WSJ he would be "stunned if [Google] actually thought it was worth it" due to the relatively small size of the market.