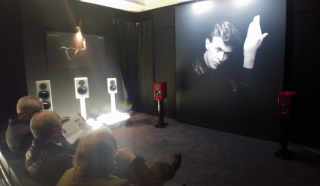 The ‘Best Display’ has been awarded to Quad, which is showing off the new £1500 Artera Solus all-in-one system with the brand's most affordable S-1 standmounts and flagship ESL speakers.

Astin Trew takes home the ‘Best Sounding Hi-Fi Demonstration’ for its demo, centred on its new AT2-2100 90W integrated amplifier, while ‘Best Innovation’ fittingly went to the Roon Nucleus, a dedicated music server for the Roon player that was announced at the Munich High End Show last May.

With Dynaudio taking home the ‘Best Display’ award last year, the Danish speaker brand has one-upped itself in 2018, winning the overall ‘Best of Show’ award thanks to its Special Fortys demo. The Bristol Show is also the first public outing for its new Xeo speakers, and the contrasting Music wireless speakers (due in the coming months) are also loud and proud on Dynaudio’s showfloor.

Last but not least is the ‘Honorary Fellowship’ award, which has been won previously by a recognized member of the industry. This year, however, the honour was awarded to UK retailer Audio T.