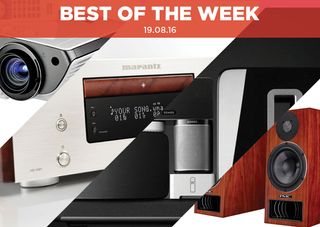 This week Marantz unveiled the H1-CD1 CD player for its MusicLink range, a study predicted that 8K will be with us sooner than you think and Sonos has pencilled in a date at the end of August for a big reveal of its latest feature.

We also had a look at AKG's K92 budget headphones, BenQ's W3000 projector and in the year of its 25th anniversary, we got our hands on PMC's Twenty5.22 speaker.

Marantz's new HD-CD1 CD player has been unveiled as part of the company's rejuvenated MusicLink line. The £450 player features the company's Hyper-Dynamic Amplifier Modules (HDAM), which it claims offers the best sound quality possible thanks to its "wide dynamic range" and "wide frequency response".

8K TV will be mainstream by 2020, study forecasts

4K is still a nascent format, but 8K is already building up a head of steam. A new study has suggested that by 2020, 8K will firmly be in the mainstream, with interest expected to spike following the decision of Japan's public broadcaster, NHK, to broadcast the 2020 Tokyo Olympic games in the format.

MORE: 8K TV will be mainstream by 2020, study forecasts

Sonos will reveal its latest feature – expected to be voice control – at an event held in New York at the end of August. If true, it will be first public presentation of the company's work on integrating voice control with its Sonos speaker range since it announced it was letting staff go to focus on the technology.

LG Minibeam projectors deliver an 80in image from 33cm

Denon claims it will change home entertainment on 30th August

Piega speaker systems set to launch in the UK

The gold trimmings look a little blingy, but there's a lot of substance to AKG's K92 headphones. For £50 you get a smooth enjoyable sound, a comfortable fit and plenty of detail and clarity. They may be the best value headphones we've heard in 2016.

BenQ continues to marry compelling performance with affordable prices in its latest projector. While the W3000 won't excite with new features or buzzwords, it offers faithful colour reproduction, good upscaling and decent contrast - and invites favourable comparisons with similarly-priced TVs.

PMC has come up with a special way to celebrate its 25th anniversary - by unleashing its Twenty5.22 speaker. Enjoyable right from the get-go, they exhibit a strong bassline and plenty of clarity and precision. They're full of energy and excitement and get a well-deserved recommendation.