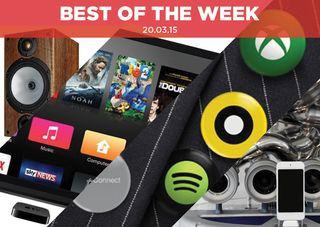 This week on What Hi-Fi? we learned that music sales via streaming had outstripped CD revenues in the US, Philips revealed their TV lineup for 2015 and there were more reports about Apple's online TV service. In a fun bit of news, iXOOST showed off an iPod dock… made from a supercar exhaust.

There was a plethora of speaker reviews this week with two standmounters – Cambridge Audio's Aero 2 and Monitor Audio's MR2 – and the Voca wireless speaker from Pure all worth a read.

For the first time ever, streaming music in the US earned more money for the music industry than CD sales in 2014, according to the Recording Industry Association of America.

As the year rumbles on (and we put a disappointing solar eclipse behind us), Philips detailed what we can expect from its TV range later this year.

The entry-level and mid-range TVs will arrive on UK shores around July with Google's Android TV platform in tow.

For those looking for the no-frills version, the 'dumb' versions will turn up earlier in April. 4K models have been announced but there's no info on a release date yet.

Apple takes the fight to Netflix

We've heard a lot about Apple's potential move into the TV market, but reports this week sound more concrete than before.

The Wall Street Journal claims that Apple is engaged in talks with several American broadcasting networks including ABC, CBS and Fox for an online service that'll launch later this year.

The service will work in a similar manner to Netflix with a subscription required to watch content.

Little else is known but we suspect Apple will make an announcement at its WWDC event in the summer.

The speed of sound...

In a cool piece of news, iXoost unveiled an iPod dock made out of a cylinder exhaust salvaged from a supercar.

It's the latest invention from the Panini brothers (of Panini sticker book fame) and it features speakers fitted into the cylinders, with an iPod dock at the front and an integrated subwoofer.

If you can find one then the cheapest option is a V8 cylinder, which will set you back £3600.

MORE: iXoost speakers are made from supercar exhaust pipes

McIntosh keeps it retro with relaunched C22 and MC75 amps

Sky TV prices to rise by up to £3/month

The MR2s are part of Monitor Audio's new budget range of speakers dubbed MR (Monitor Reference), and despite the new branding they have much in common with the BR series of yesteryear.

So what we have here is hi-fi on a budget and the MR2s put in a respectable performance. Rivals unearth more detail but in the MR2's favour is a mature sound and playful character.

For a budget hi-fi speaker, they're a tempting proposition.

Wireless speakers in lower price bands can fall prey to looking cheap and plastic, but Pure bucks that trend with the Voca's stylish aluminium case.

So does the performance match the quality of the appearance? Almost. There's a decent amount of detail to go with the finesse and texture, but the bass is overdone.

Other than that you'll have a fun time listening to the Voca.

Cambridge Audio's Aero 5.1 speaker package romped home to an Award last year and now we have the Aero 2 speakers (not from that package) in our possession. How well did they fare?

Pretty well. They look unassuming but beneath the surface is a BMR driver that covers a wider frequency range than a standard tweeter. As a result we found the sound to be cleaner and better integrated.

It does trip up in places, struggling to match the insight and detail of rivals. Nonetheless, it's a competitive effort from Cambridge Audio.