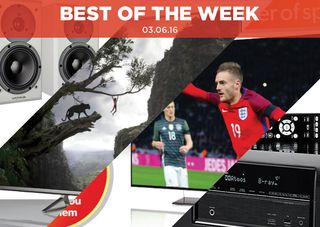 This week Panasonic announced it was ending production of its TV panels, LG and the BBC conducted a live broadcast test of HDR and Denon unveiled its X-series of AV amplifers.

And last but not least, there's the latest issue of What Hi-Fi?, now available at all good newsagents.

As the price of 4K TVs continue to drop, we've reviewed five affordable 4K tellies from the big brands to determine which is the best value for money. There's also a stereo speaker test featuring B&W, Dynaudio and Quad and as if that's not enough, we also have a shootout in the Android smartphone market with Samsung, LG and HTC all gunning for top spot.

MORE: User review of the month, May - Arcam FMJ A39

Panasonic has announced that it will end production of its TV panels in Japan later this year.

The company's plant in Himeji has not turned a profit in six years of operation, mainly because of intense competition from manufacturers in China and South Korea.

It leaves Sharp as the only TV panel maker in Japan, as Panasonic focuses on profitability.

We've had broadcasters looking into 4K (and even 8K) streaming, and now LG has teamed up with the BBC to determine whether it's possible to do the same with live HDR content.

The trial took place at the SES Industry Days on the 26th and 27th of May, using the Hybrid Gamma Log (HLG) technology that's been developed by both the BBC and Japan's equivalent, NHK.

While there's no word on when 4K broadcasts will arrive, these tests do suggest the broadcasting industry is moving towards embracing 4K.

X marks the spot for Denon as it announces three new models in its X-series of home cinema amplifiers.

The range includes the AVR-X1300W, X2300W and X3300W. All three have Dolby Atmos, with DTS:X arriving later in 2016 as well as your standard Bluetooth, wi-fi, AirPlay and Spotify Connect compatibility. There's also support for high-resolution audio.

Dolby Labs, the National Film and Television School, and the best sound around

We've been impressed by Panasonic's 2016 TVs so far, but the big question is, can it keep that quality up or is it a flash in the pan?

After testing its entry-level 4K effort we can say it's not the latter. However, quality has taken a slight dip. While blacks are supremely deep, issues arise in terms of the subtlety of the image, and how well it handles shadows and bright lights.

Nonetheless, the way it depicts colours is fantastic and 4K/HDR footage is sharp, clear and noticeable. If you can accept its minor flaws, there's a lot here to like.

Don't call it a comeback; Dynaudio has been here for years. It hasn't been as consistently excellent as some of its rivals, but with the Emit 10 standmounters all is forgiven.

There's a bit of everything here. These Dynaudios are versatile, transparent, energetic and precise and they give the impression that nothing gets past them. They're natural performers and very expressive ones at that.

We don't have any issues with them at this price. They're impressive in every way.

Denon's AVR-X2200W was one of 2015's best AV amps, so we don't envy Denon the task of replacing it with something better.

On the surface little has changed, but from our tests the 2300W sounds cleaner than its predecessor, while also being more adept at bringing out low level detail and bass.

With the price remaining the same, this Denon is even more enticing. As it stands, this is the best £500 AV amp out there.