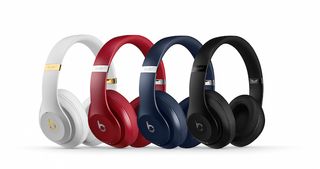 The technology also adjusts itself according to how the headphones fit on your head – taking into consideration leakages caused by hair, glasses and different ear shapes – and the music that you’re playing. Beats claims this Pure ANC real-time calibration operates up to 50,000 times a second.

Like Apple’s own AirPods and Beats’ Solo 3 Wireless, the Studio 3 Wireless feature Apple’s W1 chip, which, as we experienced in our time with the AirPods and Solo 3s, brings several benefits – especially to iOS users, such as those with an iPhone 7 (or an iPhone 8).

For one, it enables proximity pairing – a one-step Bluetooth connection to the iPhone. Additionally, iPhone users can switch between devices logged into the same iCloud account to, say, move from an iPhone conversation to watching a film on their MacBook.

Then there’s Class 1 Bluetooth connectivity, which theoretically ups the range you can move from your source from 10m (the distance limited by Class 2 Bluetooth) to 100m.

The chip also promises 22 hours of wireless playback with noise-cancelling on (and 40 hours with it off), which is slightly more than the 20 hours offered by the class-leading Bose QuietComfort 35, Sony MDR-1000X and Sony WH-1000XM2, and the 15 hours claimed by the AKG NC60 Wireless.

A battery bonus: Fast Fuel charging grants three hours of playback from just 10 minutes of charging via the included Micro-USB cable, too.

As is the norm for Beats’ – and its rivals’ – wireless fare, the Studio 3 Wireless have built-in earcup controls and a microphone that allow you to make calls, control playback and activate Siri.

Beats is also, predictably, promising better sound. No bad thing considering our review of the Beats Solo 3 headphones left us a little unconvinced in that department.

Not one to shy away from offering its cans in several colours, Beats is offering the Studio 3 Wireless in black, white and red, plus two special edition finishes: Porcelain Rose and Shadow Grey.

The Beats Studio 3 Wireless are available now for £300, which is broadly in line with the cost of its rivals. We look forward to seeing how they perform.

Bose vs Sony vs Sennheiser: which are the best wireless noise-cancelling headphones?