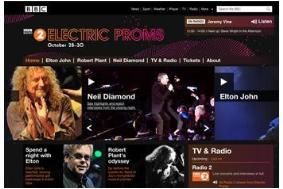 In 2010 the five-year-old spin-off from the classical music Proms featured Robert Plant, Neil Diamond and Sir Elton John, among others. It was broadcast on a wide range of BBC outlets, including Radio 2 and 6 Music.

But it will be no more. Radio 2 controller Bob Shennan says the Electric Proms is being axed as part of the Beeb's efficiency drive. He adds that he's "disappointed" to lose the annual festival, but has pledged more high-quality live music programming in an "alternative, more cost-effective way".

Last year BBC 6 Music, which also faced closure, won a reprieve after a public campaign to save it.