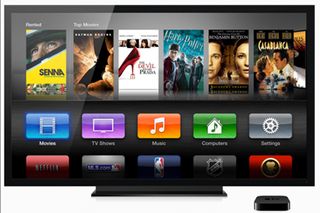 More details have emerged about the new Apple TV, which was somewhat overshadowed by the launch of the new iPad.

It appears that Apple TV now has 512MB RAM, double that of its predecessor, along with the same 8GB storage. It also comes with another wi-fi antennae which should boost wireless connectivity to your home network.

The price remains the same at £99.

It's not just the iPad that's had a makeover. Apple TV has, as predicted, also just received an update. It looks the same as the original, packed into a palm-sized black box, but inside it's had an upgrade.

A new user interface serves up third party apps like YouTube, Flickr and Vimeo – easily accessed from big, pretty on-screen tiles. It even lets you use Netflix if you’re not a fan of iTunes movies – and it now has a Genius button to help you pick your flick.

Photo Stream is also available on your Apple TV and syncs live over your wi-fi network, all displayed in glorious HD.

Judging from the “Computers” icon in the menu you should be able to access your home network’s content very easily – probably still only MP4 films though.

But it will come with AirPlay mirroring if you want to run content on your MacBook and watch it on your TV.

And the best part, it'll all come for an affordable £99. Plus owners of the old Apple TV2 will be able to download the new UI.