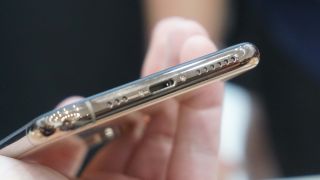 If you want to connect your wired headphones to your shiny new iPhone, you'll now need to pay £9 for a headphone adapter.

Despite some eye-watering prices for the new iPhone XS and XS Max (and even the entry-level iPhone XR), Apple has quietly removed the free, bundled dongle that allowed you to connect 3.5mm headphones to the Apple Lightning connection.

Ever since Apple ditched the headphone jack in favour of a sole Lightning connection, pushing consumers towards wireless earphones, the company has continued to bundle a free headphone adapter with all new iPhones to give users the choice. Now, you'll have to pay for the privilege.

It wasn't mentioned in Apple's presentation but the Apple store listings confirm the free accessories bundled with the new iPhones – and there's no sign of the 3.5mm to Lightning headphone adapter. You do still get a free pair of Apple EarPods, however.

So if you do want to connect your standard wired headphones, you'll need to pay £9 for the adapter. With the most expensive iPhone XS Max costing £1449, that might seem a little unfair on Apple's part. Clearly, Apple wants to kill-off the headphone jack.

Apple TV 4K to get Dolby Atmos update this month