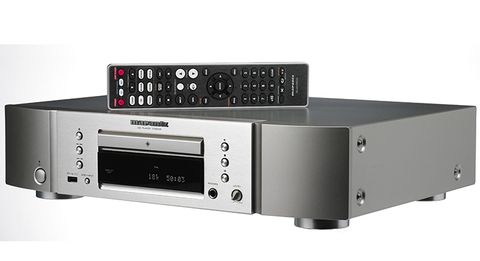 Best CD player under £500, Awards 2015. A fantastic player and immense value for money. Its predecessor was already a winner, and this has topped it.

There’s something admirable about a company that just won’t quit, even after it’s fought its way to the top. We’ve lost count of the gongs the Marantz 6000 series has scooped over the years, yet Marantz keeps tweaking.

The result: sprinkles of improvements on top of an already superb entry-level CD player – our current Award-winner.

We get started with a spot of piano pounding from Rubén González, and the CD6005 responds with increased subtlety compared with its predecessor.

There’s a greater sense of space, on top of an already-open delivery. As hands make their way across the ivory, it’s more obvious that each key is struck with varying strength.

Notes are more crisply drawn, with leading edges getting firmed up to clarify the textures of instruments. Greater definition, then, but it’s never at the expense of smoothness. There’s a lovely free-flowing character that’s fluid but not overly rich.

Combine that with good timing and you have a spirited performance, capable of following all the sonic contours of a track with precision and panache.

It’s also a really engaging performer. Dynamics are improved, and the 6005 expertly handles the challenge of Feeder’s Piece By Piece. Peaks stretch that much further and troughs drop even lower: the opening drums fall off a cliff before a soaring guitar intervenes.

What really struck us throughout our test was this CD player’s musicality. We often found ourselves just enjoying the experience, abandoning our analyses (momentarily, you understand). It’s as if the player takes itself out of the equation, leaving the listener with their music.

This is partly due to the Marantz’s nicely judged presentation that balances refinement, richness and energy really well. It also helps that all the musical elements have been glued together to produce a hugely convincing, coherent sound.

Be sure to fiddle with the player’s sound mode. This turns off the display, the digital outputs, (or both) and improves sound quality. There’s no stark contrast – unlike an old school bass boost – but listen for longer and you’ll notice a more spacious, more subtle sound with both set to ‘off’.

A stunning performance, then, and we’re not surprised to see the CD6004 overtaken. But how did Marantz manage that? By retuning the parts for the power supply and audio circuitry. That’s how. Well alright, the USB port at the front now handles WAV and charges iPads properly, even in standby. Oh, and the display has an extra line of text.

Even the body looks the same (with the exception of shinier buttons) and mirrors the company’s more expensive separates. At the back are identical connections: a set of analogue outputs next to digital coaxial and optical sockets.

Marantz has played it a little safe. But you don’t get this far ahead and throw everything out in the name of innovation.

When you’ve nailed this corner of the market, you don’t need to do much else. The best has just been made better. Again.