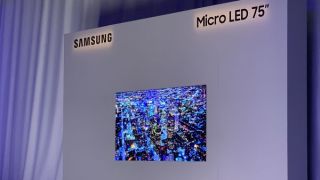 MicroLED promises to be the next big upgrade in TV technology. But what is it? How does it work? When will it be available and how much will it cost? What’s more, is it actually all it’s cracked up to be?

Allow us to give you the lowdown on why everyone is so excited about what MicroLED displays have to offer.

At this point it’s fairly accepted wisdom that TV backlights are fundamentally flawed. Even the really excellent examples, such as on the Samsung Q90, are limited in terms of fine control of contrast and add to the overall thickness of the set.

Ditching the backlight is therefore the way the TV industry is heading, but while some manufacturers have thrown their weight behind OLED, which is self-emissive, Samsung has avoided it, citing brightness limitations and concerns over the lifespan of the organic compounds. Ultimately, its goal is almost certainly self-emissive quantum dots, but with those still seemingly a long way off, the company is also throwing its considerable weight behind MicroLED.

MicroLED sets are similar to OLEDs in their self-emissive properties, but instead of using organic light emitting diodes they use tiny, non-organic LEDs - three per pixel. That means that each pixel can be turned on or off individually, or can display a completely different colour to the one next to it. The result is essentially perfect contrast and colour control.

What are the advantages of MicroLED?

Of course, that’s essentially what OLED already does, but there are clear advantages to MicroLED. The first is increased brightness: while it’s widely thought that OLED is inherently limited to a peak brightness of around 1000 nits, Samsung says its first commercially available MicroLED sets will boast 4000 nits, and could go as high as 10,000 nits in the fairly near future.

Secondly, because MicroLEDs aren’t organic, their lifespan isn’t nearly as short as that of OLEDs. While OLEDs are generally expected to fade in time, Samsung says its MicroLEDs will keep going for around 100,000 hours - that’s over 11 years of non-stop use.

Thirdly, MicroLEDs are very power-efficient, largely because there’s no need for a colour filter for them to shine through. There’s nothing between the LEDs and your eyes, so they can be brighter with less effort.

Fourthly, MicroLEDs should, in the long-run, be fairly cost-effective to produce. That said, the first sets will be prohibitively expensive - more on that below.

Then there are the qualities that MicroLED shares with OLED, such as exceptional thinness (in fact, MicroLED panels could be even thinner than OLEDs), a non-reliance on bezels, and essentially perfect viewing angles.

In other words, MicroLED is designed to take the best of OLED and make it brighter, longer-lasting and more affordable.

What are the disadvantages of MicroLED?

The big disadvantage of MicroLED TVs is how tricky they are to manufacture. Each pixel requiring three LEDs means a 4K set requires 25 million of the tiny things, and mass producing these in perfect alignment and with no variation in brightness is apparently a very serious challenge.

This will likely lead to prices being very high in the first place, although they should come down once the manufacturing process has been refined. IHS Markit predicts MicroLED shipments will rise from under 1000 this year to 15.5m by 2026, thanks to a dramatic drop in manufacturing costs, which should bring the price down drastically.

So that’s the theory, what about the practice? Well, Samsung has pretty concrete plans in that regard. The company’s first public foray into MicroLED was The Wall, demonstrated at CES 2018. At 146in it wasn’t exactly consumer-friendly, but as a tech demo it was rather convincing.

What’s perhaps most interesting about The Wall, besides the picture quality, is its modular nature. It’s constructed using MicroLED panels, and while it was shown in a traditional 16:9 configuration, it can actually be specified at any size and ratio.

The 2019 version of The Wall is a 3cm-deep, wall-mounted (obviously) and customisable TV that can take various sizes, ratios and resolutions between 73in 2K and 292in 8K.

Why so big? Actually, Samsung says it’s perfectly capable of producing MicroLED sets as small as 40in, but that it’s focused on bigger screens on account of industry trends and hitting a price-to-size balance (those 40in screens would likely be disproportionately expensive).

Sony made their own mark with MicroLED, with its first consumer-targeted super-screen, which it launched at CEDIA: a 16 x 9 feet, 4K resolution screen, which we were told would cost $877,000 to install.

Sony's Crystal LED display system uses ultra-fine micro-LED measuring 0.003 mm² –half the width of a human hair – which are 100 times smaller than traditional LEDs. it delivers 1,000,000:1 contrast ratio, thanks to 99 per cent black surface area, and supports 10-bit grayscale and up to 120Hz high frame rates. It delivers 100 nits HDR brightness and claims near-180-degree viewing angle. It certainly sounds impressive.

Again, this remains a very expensive option. We look forward to seeing if anything more realistic is revealed at CES 2020.

Samsung is also keen to push all of its MicroLED displays as more than simply TVs. Thanks to the long life and ultra-low power consumption, it says they can be left on all of the time. The company’s Ambient mode, already available on its QLED TVs, will really hit its stride here - remember that the TVs can be ultra-thin and bezel-free, so could almost disappear against the wall upon which they’re mounted. Or, Samsung says, it could be used as a virtual fish tank, or even a pretend window. It could always be on and displaying useful information, such as news headlines, weather or your calendar.

Samsung is also keen that these MicroLED sets usher in new ways of interaction with a display, suggesting that they won’t require a traditional remote control to operate.

One thing that isn’t decided is how Samsung’s MicroLED TVs will generate sound. Traditional TV speakers require bezels and add thickness, which would rather diminish the aesthetic goal of MicroLED. Going down the acoustic surface route employed by Sony on its A1 and AF9 OLEDs is an option, but this too adds thickness and Samsung isn’t convinced it’s the best approach from a sound quality point of view. It may be that the MicroLED TVs are sold simply as displays, with discrete sound systems offered as add-ons.

MicroLED really does look like OLED but with better brightness, colours and (apparently) a much longer lifespan. No wonder LG is also pursuing MicroLED alongside its current OLEDs.

And with Samsung, Sony and even Apple already exploring this modular alternative, it looks like it could be the next big TV tech to get excited about.