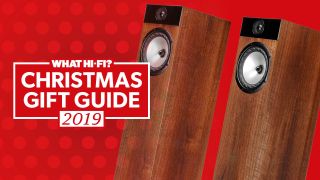 Somebody you really love? A friend you need to impress? Deserve a treat of your own this Christmas?

Whatever your reasoning for spending up to £500 on a single gift this year, it'll feel a lot more expensive if you get the wrong one. And that's why we're here. Whether it's a pair of speakers, a portable DAC or a 4K telly you're after, this page is designed to give you a nudge in the right direction.

If last Christmas you gave them a Scart, the very next day they threw it away. Hopefully these gifts will fare a little better. Merry Christmas and hi-fi New Year, everyone.

Fyne Audio made a real splash with some very competitively-priced loudspeakers this year, including these Award-winning floorstanders. Somewhat re-writing the rules of performance you can expect from a pair of sub-£400 towers, the F302s are full bodied, musical and wildly entertaining.

We aren't entirely sure what kind of sorcery Denon uses on its micro systems, but we're big fans. Partnered with a suitable pair of budget loudspeakers, or Denon's own SC-M41 standmounters, the D-M41DAB is one of the finest all-in-ones out there.

Audio Pro again took home three wireless speaker prizes at this year's What Hi-Fi? Awards, including a Product of the Year gong for the Addon C10. The largest of the company's boombox-style speakers, the C10 combines impressive scale with Audio Pro's now famously musical presentation.

With great looks, a streamlined design and excellent sound quality, the Elac B5.2 standmounters are brilliant  for the money. Their sound is detailed and beautifully organised, and the fact they're well under £500 is the icing on the Christmas cake.

Gather round the wireless and and eat coal like they used to in Christmases gone by. Only this time, make it a Roberts Stream 94i radio and real food instead.

The Stream 94i is a FM, DAB and internet radio, plus it has Spotify Connect, wi-fi connectivity and USB playback. The build is excellent and the styling smart. (Coal/real food not included.)

Ah yes, there is absolutely no better start to Christmas Day than a bottle of port with a Christmas film. Or is there? What about if that Christmas film was on 4K Blu-ray? Costing less than £300 – so plenty spare to spend on discs to use it with – this Panasonic 4K disc spinner will wow you with its punchy and believable colour balance, vibrant HDR picture and powerful sound.

Of course, a 4K Blu-ray player is redundant without a television capable of displaying its picture. For less than £500 you won't find better than this 43-incher from Samsung, which matches the Sony machine with its own keen eye for detail and a dynamic image. Even in HD and standard definition, the Queen's speech will be delivered with such clarity it'll be like looking at the back of a five pound note.

This is Sonos's smaller, cheaper soundbar, but it's no less impressive a device. In fact, we liked it so much, we gave it one of our coveted What Hi-Fi? 2019 Awards. It supports the Amazon Alexa, Google Assistant and Apple Siri personal assistants, so you're spoiled for choice when it comes to voice controls. It might be your best bet for conversation by the end of the festive period.

Soundbars are great and everything but nothing says Christmas like 5.1 and an AVR. This multi-award-winning AVR from Sony is the part you'll be able to afford for under £500, sneaking in at £429.

The feature-packed Sony STR-DN1080 sounds fantastic. It reaching deep into its reserves to deliver a performance packed with punch, dynamism and authority in a way we haven’t heard from home cinema amplifiers at this sort of price.

Of course you could always go for the home cinema speaker package instead and let your giftee find themselves an AVR.

The Wharfedale DX-2s are a snip at £399. You're not going to get anywhere near what this set can offer for under £500 anywhere else. Their sound is punchy, detailed and surprisingly expansive given their diminutive size. If you're looking for a discreet 5.1 system, then this is it.

We imagine there will be a fair few pairs of wireless headphones being unwrapped this Christmas morning, but not many will be received with such gleeful gratitude as these on-ears from Sony. Our Product of the Year in 2018 and 2019, the WH-1000XM3s offer a natural-sounding, rhythmic and dynamic performance, and noise-cancelling good enough to block out Grandad's post-dinner snoring.

The Pro-Ject Juke Box E is almost everything you need in one box. Just add a pair of speakers and some records and you can get playing immediately with this turntable system. It's seriously convenient and has Award-winning sound quality. It's the perfect excuse to disappear up to your room like a teenager as soon as you've finished your sprouts.

Coming in just under budget, the Node 2i is one of the most impressive performers from Bluesound's latest generation of multi-room products. It adds myriad streaming services to your hi-fi system with a highly detailed and entertaining presentation.

Delivering much of the sound of its big brother, the Chord Hugo, but at a fraction of its near two-grand price tag, the Mojo is a true feat of hi-fi and engineering. Our favourite DAC costing between £300 and £500, it remains streaks ahead of the competition in just about every facet of its performance.

Beyerdynamic's Amiron home headphones just squeeze into this price bracket, thanks to a rather generous discount on their original £545 price tag. But they'd be worth altering your budget for regardless – clear, insightful and better organised than the Filofax Christmas party.

Reduce the audiophile in your life to tears by giving them the job of cutting the onions for the roast... and the 2019 Product of the Year-winning music streamer.

If their hi-fi separates are only set-up for traditional formats – CDs or vinyl, say – than the Audiolab 6000N Play will drag them into the present so fast you might want to get them a neck brace to avoid the whiplash.

Impressive features, excellent sound quality and the kind of stylish good looks that can fit into any home at any time. The Ruark Audio MR1 Mk2s are brilliant desktop speakers for the money. You might struggle to wrap these up and give them away when push comes to shove.

A second portable is the kind of luxury it's hard to justify to yourself, but if someone was to buy a pocket device dedicated to hi-res audio for you, well, that would be a different matter. Watch the smile spread on their face when they realise how good portable tunes can really sound.

Now, a Cowon D2 is going to leave you some pocket change from your £500, so you'd better throw in what we consider to be the very best in-ear headphones for 2019.

There's an energy and immersiveness to the Shure SE425's sound that makes them some of the most addictive headphones we've ever tried.