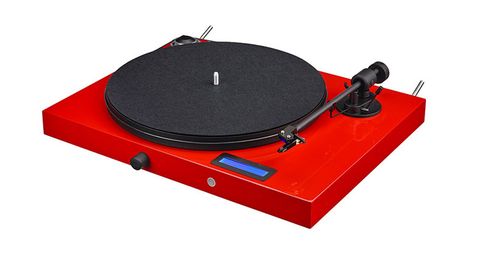 Far less compromised than you might imagine, the Juke Box E makes a genuine case for itself

When we first clapped eyes on Pro-Ject’s new Juke Box E turntable-on-steroids, our first thought was “brand new? You’re retro”, just like that mid-90s song says. The second thought, which was along the lines of “we haven’t seen a music centre in years”, swiftly followed.

Of course, this isn’t a music centre in the mid-to-late 20th century sense. Oh no, it’s a lot more brand new and retro than that. What Pro-Ject has done with the Juke Box E is to have one of those ideas that is simple and obvious, once someone else has had it.

Here’s a record player – based on Pro-Ject’s well-regarded Primary turntable – that’s also tricked out with an Ortofon OM 5E cartridge, amplification (25W per channel into 8 ohms) and Bluetooth receiver. It’s an idea Pro-Ject has had before – the Juke Box in 2010 was a turntable/amp/phono stage – but the concept has been thoroughly updated here.

At the back of the deck, you’ll find stereo RCA outputs at line level and pre-amp/phono level, plus a corresponding stereo RCA line-level input. There are also left/right speaker outputs and an aerial socket for the Bluetooth receiver. At the front there’s a (slightly wobbly) turn/push dial for input selection (turntable, line or Bluetooth, obviously) and an IR receiver for the remote control that’s not so much hidden away as had attention drawn to it.

Elsewhere in the packaging, there is a dust cover (which, of course, fouls the Bluetooth aerial when it’s lifted to put on or take off a record), a couple of lengths of half-decent speaker cable and a truly remarkable remote control.

The remote handset doesn’t have many functions to control but, with the possible exception of the power on/off button, none of the controls are where you might reasonably expect to find them. It’s as if a remote control kaleidoscope was shaken and the buttons allowed to fall where they may.

That aside, just strap on a pair of speakers and you’re good to go.

We start with a vinyl copy of Brian Eno’s Another Green World on the turntable and a pair of Mission LX-2 standmounting speakers at the front end (Pro-Ject will add a pair of its own speakers to the Juke Box E for the all-in price of £500). Right from the off, this is recognisably a Pro-Ject turntable – it carries the brand’s sonic signature as surely as some sports brands carry three stripes.

In essence, that signature is one of easy-going fidelity – the Juke Box E establishes a decently spacious soundstage and positions instruments (or, often in the case of Eno, noises) upon it securely in their own space even as they integrate and interact together.

Tonally, the JBE is on the warmish side of neutral, which is what we’ve learned to expect from turntables costing less than silly money. It’s untroubled by even tricky tempos or gimpy rhythms; it has reasonable shine and brilliance at the top end; its midrange reproduction is detailed enough to make Eno’s sometimes rather approximate vocals endearing in their earnestness.

We up the ante a little with a 180gm reissue of The Pharcyde’s Bizarre Ride II . This gives the Pro-Ject further scope to show off its rhythmic prowess, but also shines a little light on what is, perhaps, the JBE’s only significant aural shortcoming. It gives reasonable weight to low frequencies (of which this album features plenty) but not quite the solidity we’d like. Bass sounds don’t so much punch as shove.

It’s not enough to make the Pro-Ject anything less than enjoyable to listen to, but it’s worth bearing in mind when speaker-matching – despite the JBE’s willingness to partner readily with any number of appropriately priced speakers, we find the Mission LX-2s have what’s required to make the Pro-Ject’s low end as martial as it can be.

Making sure you team it with sympathetic speakers is a much surer way of getting an acceptable level of low-frequency solidity than deploying the remote control’s ‘loudness’ button, which comprehensively skews the Pro-Ject’s tonal balance – and not for the better.

On the subject of system-matching, it’s worth noting the Juke Box E isn’t the out-and-out loudest system we’ve ever heard, so it’s also worth giving proper consideration to speaker sensitivity.

The overall quality of sound remains constant no matter how you use the JBE. A Tidal-derived stream of Smog’s Dress Sexy at My Funeral via iPhone 8 Plus using the Bluetooth input, or a CD of GoGo Penguin’s A Humdrum Star from a Marantz CD6006 UK Edition via the line-level input, retain the Pro-Ject’s balance - even though the warmth and timing prowess is diluted somewhat.

In essence, the Pro-Ject Juke Box E is something of a rarity. It’s an all-in-one system that demands very few compromises, given its price. It’s also an all-in-one system that we can’t easily argue against in favour of separates. This level of functionality is difficult in the extreme to replicate using individual components at this sort of money.

Plus it’s extremely convenient. So if space is at a premium, funds are (relatively) tight, or both, you should cast your glance in this direction.

MORE: All our Pro-Ject reviews