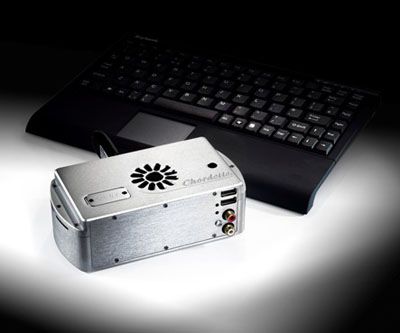 About as stylish as media PCs get, but you pay heavily for that privilege

Centre of controversy
For this review, we’ve chosen to concentrate on the the most intriguing and controversial product, the Mogul. It’s like any other Windows 7 machine, but housed in a tiny Chordette-style case.

Connectivity is extensive. There are six USBs, an HDMI and stereo RCAs alongside normal PC connections such as Ethernet and VGA, and a wireless keyboard and wi-fi dongle are included.

A PC with some sonic muscle
We call the Mogul controversial because if you study the specs there’s little to distinguish it from a traditional PC costing a quarter as much.

Even Chord itself admits that it doesn’t think this will be a big seller. That said, the Mogul is a cool-looking thing, and if money isn’t an issue it really completes the system, visually and sonically.

It sounds powerful and full-bodied, delivering the kind of expression few would expect from a computer.

Detail levels are impressive, as is its sense of transparency. Video (1080p is supported) is decent given reasonable source material.

Cosmetically, the logos would look better if they all lined up properly, and we wish the front of the Mogul didn’t sprout unsightly inputs. We’d like a classier remote handset, too – the system deserves it.

But as good as the Mogul is, that price gets in the way of a solid thumbs-up.