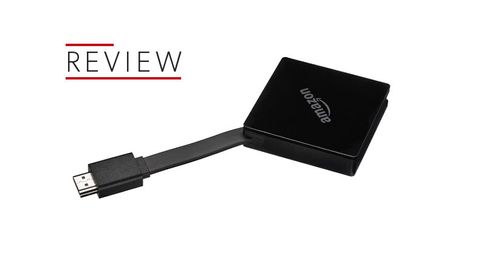 The fact there are several video streamers fighting for your TV’s HDMI ports is hardly novel - they have been battling it out for almost a decade (no, we can’t believe it’s been that long either).

But what is new is their recent support of 4K and HDR video technologies. The new Apple TV 4K (£170), Roku’s Streaming Stick+ (£80) and Google’s Chromecast Ultra (£70) all combine support for both - and so does Amazon’s latest Fire TV 4K.

While its predecessor supported 4K video at 30 frames-per-second, the new model takes that to 60fps and adds support for both HDR10 and Dolby Atmos. It also comes with the latest Alexa voice control remote.

It’s the same one as bundled with Amazon’s basic streamer, the Fire TV Stick (£40) - but that is limited to 1080p streaming, without HDR or Atmos, and has less processing power and memory.

Claiming to be 40 per cent more powerful than the Stick, the new Fire TV 4K also has a 1.5GHz quad-core processor, 2GB of RAM and 8GB of internal storage.

But what’s most noticeable about the new Fire TV 4K is its design. Amazon has taken a page out of the Google Chromecast Ultra’s design book by ditching the traditional box seen on the last-gen Fire TV and opting for a dongle form instead.

A small square box (imagine two matchboxes side-by-side) is attached to a dangling HDMI cable, which is bendy for flexible positioning around the back of a telly.

It may be a little chunkier than its Google and Roku rivals, but it’s also fairly lightweight and shouldn’t be much of a burden on your TV’s HDMI socket once plugged in.

The glossy finish is a magnet for fingerprints, and we’d like some power or indicator lights for reassurance - but as it can be handled once, plugged into a TV and then forgotten about, the compact dimensions matter more.

Power is via a micro-USB slot (the only other connection) and the supplied USB mains adapter.

We try powering it through one of the USB ports on the Samsung QE65Q7F TV we are testing it with instead - but operation is slower, and it struggles to stream in 4K.

The Fire TV 4K’s operation is almost seamless. Upon initial start-up, it walks you through downloading apps by category – from video and music to news and sport – and there’s a short video tutorial for newcomers to the service.

We find the built-in dual-band wi-fi to be stable throughout, although you can purchase an ethernet adapter (from Amazon, naturally) for £14.

The Fire TV opts for HDR10 over Dolby Vision (the Apple TV 4K has both), which is a shame for the early adopters of Vision. It does mean 4K and HDR content across Netflix, Amazon Prime Video and YouTube is all in reach.

When we reviewed the last-gen Fire TV box in 2015, it was the only streamer brand with both Amazon Prime Video and Netflix.

But now its rivals have caught up – Roku’s latest streamers have both, and the Apple TV 4K will have following an update – and, with the two apps present on most 2016 and 2017 smart TVs from the Big Four, Amazon no longer has an edge.

Still, it has a good selection of movies and its own original TV shows, both as part of Prime and for rent. And, 4K and HDR aside, it boasts the full suite of UK catch-up TV apps - which is more than we can say for the Apple box.

We are a little disappointed at the omission of Sky’s Now TV service, though, as that would complete the Fire TV 4K’s app offering. As for music streaming apps, there’s Amazon Music and Spotify, but not Tidal or Apple Music.

Where Amazon could pip its rivals is with Dolby Atmos content. However, while the Fire TV 4K supports it from a hardware point of view, there’s no Atmos content accessible on it right now.

Netflix is the only streaming service offering (limited) Atmos content, and the app supporting the audio codec is currently only built into LG’s 2017 TV range (and Microsoft's latest Xbox games console).

Those with Dolby Atmos speaker packages or soundbars will have to sit tight.

It’s just as familiar and full-on. The home menu is still a fully-fledged Amazon Prime Video assault we imagine only subscribers of the service will happily endure – especially as a banner for sponsored content is now displayed across the top.

There are sub-menus for ‘4K Ultra HD TV’ and ‘HDR TV Shows’ (as an increasing percentage of Amazon Original Series are now shot in 4K HDR) sitting alongside the usual suspects: ‘Amazon Originals’ and ‘Featured Apps and Games’, for example.

The search is easier now, thanks to voice control. By long-pressing the microphone button on the remote control, you can take advantage of most of Alexa's commands – including ordering pizza and getting a weather forecast.

There are Fire TV-specific functions too. For example, you can find specific content by saying its name, or those of the directors or actors in it. You can also launch apps and find music on Amazon Music – although not Spotify, as you can with the Echo and Dot speakers.

Alexa’s services don’t extend to setting alarms and timers or performing Alexa-to-Alexa calling and messaging, either - and you can’t control TV volume with your voice.

Still, you can take control of other smart home devices within the ever-widening Alexa ecosystem, from lightbulbs to thermostats. If you own an Amazon Echo speaker and have lost the remote, you can control the Fire TV 4K using the Echo instead.

The Amazon Fire TV 4K won’t be for everyone. With its performance being on a par with those of the apps built into Samsung TVs, it doesn't offer anything new to those with a newer TV.

Non-Amazon Prime Video subscribers may prefer more objective platforms, such as Roku’s, and there’s nothing to tempt loyal Now TV subscribers either.

Of course, if you’re not fussed about upgrading to 4K and HDR video streaming, or Dolby Atmos surround sound, just yet, you should probably consider saving some pennies with the Fire TV Stick.

However, for people with televisions that are a few years old but have compatible 2.0, HDCP 2.2-certified HDMI inputs for 4K passthrough from a 4K streamer (but are missing such comprehensive app support), the Fire TV 4K could be exactly what they need.

It’s an affordable way to introduce the 4K and HDR streaming content available (apart from Apple’s iTunes) without having to hand over more than twice as much for the Apple TV 4K box.

Alexa integration proves to be this Fire TV’s biggest and most useful selling point and, while Dolby Atmos support isn’t much of an exclusive right now, it alone could attract an audience if the content arrives before the next wave of streamers arrive.