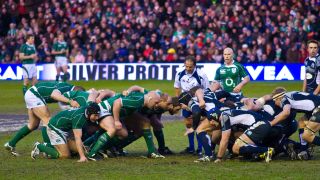 The Six Nations is back – and it's already proving to be one of the most exciting sporting events of 2020. Six teams are battling it out for glory over the course of five epic rounds, with those who top the Six Nations table being crowned champions. Want to catch all the rugby greats in action? You've come to the right place. Here's how to watch every Six Nations 2020 fixture live.

Ireland were scheduled to face Italy in round four of Six Nations at the Aviva Stadium in Dublin on 7th March, but the match has been postponed because of coronavirus.

France was the only side left unbeaten and in pursuit of a Grand Slam, until their surprise defeat at the hands of Scotland at Murrayfield. That leaves it awfully tight at the top and with the championship very much in the balance. Will it have a chance to be played out?

Italy vs England and France vs Ireland have also been postponed with no rescheduling planned as yet.

And Wales's match against Scotland on 14the March has been postponed until further notice. The match was due to take place at the Principality Stadium but was axed just 24 hours before kick-off.

According to a Welsh Rugby Union statement: "Whilst medical advice remains consistent, we have decided that it is in the best interests of supporters, players and staff to fall in line with recent measures taken across the UK and global sports industries.

"Every effort has been made to stage this game and we appreciate that individuals will have been inconvenienced. Given the fluid and unprecedented nature of this issue a postponement became the only viable option."

We'll be following the all the Six Nations news and rescheduling announcements, so keep an eye on this page for all the latest. Here's how to watch every try and tackle, providing the Six Nation continues...

Watch the Six Nations in the UK

How to watch the Six Nations from abroad using a VPN

How to watch the Six Nations in the USA

How to watch the Six Nations in Australia

How to watch the Six Nations in New Zealand

How to watch the Six Nations in South Africa