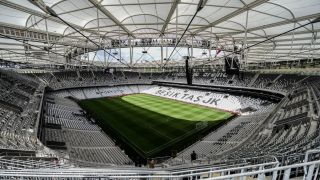 The 2019 UEFA Super Cup will be the very first all-English contest in the competition's 44-year history. Liverpool and Chelsea will slug it out at Besiktas's recently revamped stadium, the 41,000-seater Vodafone Park in Istanbul.

If you haven't made the flight out, then here's how to catch a top quality Super Cup live stream to enjoy on your TV, laptop or mobile, wherever you are in the world.

The European season's traditional curtain-raiser is set to be too interesting to miss. Liverpool are the last English club to lift the giant vase and it's going to be fascinating to see just how seriously Jurgen Klopp decides to take his first chance of a pot in 2019/20, knowing ultimately it's the Premier League title he really wants.

For Chelsea, on the other hand, it's a chance to make amends for Sunday's 4-0 drubbing to Manchester United at Old Trafford. The Blues' prodigal son, Frank Lampard, is not likely to have such a cavalier attitude to this game as his opponent.

With a big appointment and much to prove, it's a clear opportunity for Chelsea's record goalscorer to win a first trophy, a few plaudits, and buy himself some of that rarest of commodities for football managers: time.

The UEFA Super Cup kicks off at 8pm BST on Wednesday 14th August. Here's how to tune in, wherever you are.

Those looking to tune into the UEFA Super Cup in the States need to switch over to TNT USA on their cable/satellite provider of choice. Coverage begins at 3pm ET. It can also be viewed on the Watch TNT website and app available on both iOS and Android.

Bleacher Report LIVE will be hosting a Liverpool vs Chelsea live stream too. The purchase of a $9.99 B/R Live Pass will bring you complete access to all the Bleacher Report content for one month, excluding NBA. In terms of football, that means UEFA Champions League, UEFA Europa League, UEFA Youth League, Belgian Pro League, BVB World and the SPL.

FuboTV will also be showing a live stream of the match. Better still, it's offering a one-month free trial for new subscribers which means you can watch the UEFA Super Cup for free.

Live stream the UEFA Super Cup from anywhere in the world

The football may be back on but it's still very much August and many will be off on their summer holidays. While you're abroad, you may find yourself geo-blocked from your regular, paid-for, domestic streaming services. To get around that, you'll need a VPN (virtual private network) which stops the sports streaming server from identifying your location and spoofs a domestic IP which it will accept.

Perfect for any kind of web use that you'd like to keep private, a VPN will help you watch football, cricket, rugby or even a different Netflix or Prime Video library from wherever you are in the world. So, if you want to enjoy the Premier League, the Ashes or just feel more secure online, then check out a VPN free trial.
View Deal

There are many VPN providers out there, with some more reliable and safe than others. A paid-for service is more likely to get something that's secure and dependable. The VPNs we recommend are the following:

Which has a 30-day money back guarantee and brings VPN access to smart devices including the Amazon Fire TV Stick, laptops, TVs and both Android and iOS mobiles and tablets. Sign up for an annual plan now and you'll also get 3 months completely free!

Once you've chosen and installed your VPN of choice, open the VPN app, select the country of origin of the Super Cup live stream you’d like to access, then head back to your chosen streaming service and fire up some all-English action from Istanbul.

BT Sports has the rights to air the UEFA Super Cup in the UK and has had the good sense to go 4K Ultra HD for its coverage of the game on the BT Sports Ultimate channel. It's also broadcast in Dolby Atmos for those who have height speakers included in their surround package, and that should certainly add a sense of that Istanbul stadium atmosphere.

BT Sports Ultimate is available on both BT TV (channel 433) and Virgin Media (channel 531) but you will have to make sure you've got the BT 4K TV box or the Virgin TV V6 box, and that you're signed up to the relevant 4K sports package.

It is also possible to enjoy the 4K BT Sports Ultimate broadcast on other compatible devices. BT Sports customers can tune in with the BT Sports app on iOS and Android on their mobiles and tablets, and in HDR too where supported.

Lucky 5G EE customers can enjoy the coverage without the need of a BT Sports package. By texting Sport to 150 they can get three free months of BT Sports in HDR straight to their handsets.

The large screen BT sports app will work for access to the UEFA Super Cup on games consoles and smart TVs but it will only be available in 4K for selected platforms.

Those without the hardware for 4K this time can make do with the HD coverage of the UEFA Super Cup on BT Sports 2. It's available on BT TV boxes, on Sky and for Virgin Media customers. Sadly, there are no pay-per-view options with Now TV. BT Sports 2 is a case of subscription only.

Fortunately, although expensive, Sky does offer a one-month rolling contract deal for all the BT Sports channels on the Sky platform. It's £29.99 per month and the first three months come with the HD channels for free. It's an extra £6.50 per month after that unless you're happy to drop down to SD viewing.

The prices for Virgin Media and BT customers vary depending on the rest of your bundle.