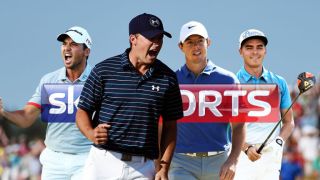 The PGA Tour has already kicked off in dramatic fashion. With the 2019/20 season poised to dish up plenty more 'ooh's and 'ah's, there's never been a better time to live stream PGA Tour golf.

The season's opening event, A Military Tribute at The Greenbrier Military, saw Tom Hoge pipped by Joaquin Niemann over the final holes. Still, it was Hoge's best ever finish and the start of a hot streak. He's already sitting pretty atop the leaderboard at the second event of the PGA Tour season, capping off a stunning bogey-free round with a 46-foot putt for birdie.

While we can't predict how the action will unfold, we can tell you that the 105th season of the PGA Tour is going to be bigger and better than ever. The expanded 2019/20 schedule is set to serve up 49 FedExCup tournaments, plus a few late-season adjustments to accommodate the 2020 Summer Olympic Games in Tokyo. (Expect to see Tiger Woods golfing for gold.)

There will also be two new tournaments, including Japan's Zozo Championship. The headline event will be a unique 'skins' game featuring Woods, reigning FedExCup champion and PGA Tour Player of the Year Rory McIlroy, as well as multiple PGA Tour winners such as Hideki Matsuyama.

If you want to watch every putt, chip and tee shot over the next eleven months – whether that be on your TV, laptop, smartphone or tablet – we've got you covered. Simply scroll down to find out how to get your golf fix from anywhere on the globe...

We'll look at the TV and live stream options for UK and USA-based PGA Tour fans below, but even after spending all that money on a subscription it's unlikely you'll be able to access the PGA Tour from another country.

If don't want to avoid the hassle of finding a local sports bar, you might want to get yourself a VPN (Virtual Private Network). It's a piece of a software that can spoof an IP address which is local to the server you'd like to access. That way, your subscription service provider will think that you're within the territorial boundaries of its service and allow you to watch the PGA Tour.

So, whether you want to watch live PGA Tour, enjoy another country’s Netflix library or just keep your browsing data private, a VPN is well worth considering.

Once you’ve made your choice, all you need to do is sign in to your VPN service through whichever device you’d like to use to watch the race. When prompted to select a server, you need to pick one which is based in the country whose content you’d like to access. Then navigate to the relevant video streaming app or website and you’re in.

Sky is the only place for UK users to watch live coverage of the PGA Tour in HD, via the Sky Sports HD or Sky Sports Golf HD channels. You'll enjoy coverage of selected Majors in Ultra HD, plus European Tours and exclusive action from the Solheim Cup in HD. Sky also serves up exclusive interviews, handy Golf Masterclasses and offers the option to catch up with specific players and caddies every week.

All that comes bundled in with all the other sports channels as part of the £23 per month Sky Sports Complete Pack. If the PGA Tour is all you care about, you can add the Sky Sports Golf HD channel to your package for £18 a month.

Worth noting: Sky's rights to air the PGA Tour will expire in 2022. Golf.TV, owned by the Discovery channel, has snapped up the rights to all PGA Tour events outside of the US in a $2billion, 12 year deal. The rights will come into force when existing deals expire, which means live events will gradually move to Golf.TV. In the meantime, UK golf fans should stick with Sky.

The Sky Sports Golf HD channel is also available on Virgin Media as part of the Bigger + Sport TV bundle. It's £72 per month but it comes with all the other Sky Sports channels and all the BT Sports ones too, including BT Sports Ultra HD. All of that brings access to just about every televised sports action you'd care to mention including Premier League, Champions League and Europa League football.

Don't want to subscribe to a full Sky package with all the bells and whistles? Choose the pay-per-view option from Now TV. Sky’s on-demand service offers a Sky Sports pass with access to live Sky Sports coverage of the PGA Tour. You can choose between a day, week or month-long pass.

A day pass for sports on Now TV costs £9.99, with a weekly pass coming in at £14.99 for those who want to see stroke of a tournament. A monthly pass will set you back £33.99 but will cover a handful of PGA events .

If you're outside the US but want to access one of the above options, you can use a VPN to effectively transport your computer or mobile device to the States. (We've listed your VPN options above).