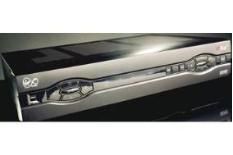 Virgin V+ operates on a slightly different model from Sky: there's a one-off installation cost of £99, then you pay a monthly amount for the service. It costs £5 a month if you subscribe to the M or L TV packages, but there's no monthly fee for subscribers to the XL package.

The cost is thus a lot less, and although the choice of high-definition programming is better than it was, Virgin still offers less than Sky.

You get the free BBC HD channel, BBC iPlayer including HD content, some FX HD shows such as Dexter plus some HD movies on demand that cost £3.99-£4.99, and some free HD documentaries.

Fortunately, the basic, standard-definition Sky channels (such as Sky 1) have been re-instated after Virgin and Sky had a bit of a fallout a few years back.

Virgin's V+ box, like the Sky HD box, has HDMI and component outputs for connecting to your screen or projector and an optical digital output to send Dolby Digital 5.1 surround sound to your home cinema amp.

There's also a Samsung V+ box – which one you get depends entirely on what's in the van when the installation engineer calls.

Both boxes are HD-ready, of course, and you can record, pause and rewind live TV just like the Sky+ box. The three built-in digital tuners mean you can watch one programme while simultaneously recording two others – that's one up on Sky +/Sky HD.

Picture and sound performance from the BBC HD feed is very good indeed, as it ought to be, and the convenience of one-touch recording is a boon.

Standard Freeview channels can be upscaled to 720p or 1080i, so some look better than normal, although many of the lower bit-rate channels (hello ITV) still look pretty ropey on a large screen.

Other services that come with the V+ box include a selection of 4oD programmes, limited programming from the recently added ITV Player and a selection of free programmes broadcast over the last seven days that can be played on demand. These include programmes available on the BBC's iPlayer service.

There's much to like about the V+ box, and it works well. If you're a Virgin Media customer it's worth considering, and Virgin's promise that it will add a further five or six linear HD channels later this year is good news indeed.

But for now, if you want the best HDTV service available, you'll still have to pay for Sky.