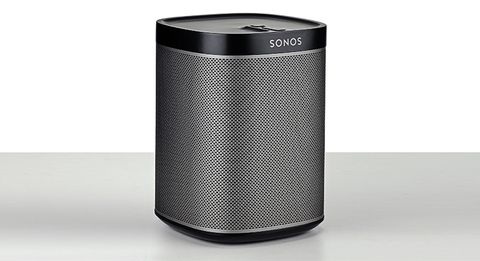 Unfazed by time, the entry-level Sonos is every bit as good as we remember

A lot has happened in the multi-room market since the Sonos Play:1 last entered our test rooms in 2013. Amid the rise of the smart watch and smart TV, smartphones breaking the 7in-screen barrier and the anti-climax of Google Glass, the multi-room market has exploded to astronomical levels, with almost every Tom, Dick and Harry looking to ruffle Sonos’ feathers.

So it may raise an eyebrow to learn that what hasn’t changed is the Play:1’s distinctive charm – you still won’t regret finding a spot for one (or five) in your home.

Sonos brought its entry-level price down with the Play:1 a few years ago, and then added the smart Sonos One to the portfolio, but this little speaker may still be the best bet for many people wanting to get into the world of Sonos.

While it’s the same old rounded speaker, software tweaks have brought improved sound, as well as Trueplay technology and even more streaming services, features that are crucial to Sonos staying at the top of the streaming game.

It’s as comprehensive a list as you could hope for, with the likes of Tidal, Spotify, Pandora, Deezer, Qobuz, Google Play Music and Amazon Music, plus TuneIn Radio for access to thousands of internet radio stations, all integrated into the Sonos Controller app. Of course, it also plucks songs stored on your local network from, say, a NAS drive.

It's designed to be used purely as part of the Sonos system, so the Play:1 still lacks any physical connections for hard-wiring external devices. Bluetooth is still absent too, which is a mark against Sonos. We’d like at least one offline option for when your network’s a bit dodgy.

While arguably looking a little outdated stood next to the more recently redesigned Play:5, the Play:1's solid, sleek design stands the test of time.

It comes in black or white, though only on the chassis’ top and bottom bands does colour come into it - what really defines the Play:1’s look is its smart wraparound steel grille.

The Play:1's sound is just as weighty and solid as we remember, with plenty of power and punch for a small speaker. It’s hearty enough to get stuck into meaty drums but, at the same time disciplined enough to keep complex rhythms on a tight leash.

Vocals sail over the top with stark clarity and dynamic expression – the Play:1 throwing them into the limelight – and there are acres of space and scale in the presentation for them to fill.

Either side of the midrange, control isn’t lacking, its bass tight and punchy, the treble detailed and refined. It’s an open, clean and balanced listen and one that’s just as happy pumping out Bloc Party as Joni Mitchell.

Only too keen to show that rhythmic fidelity isn’t left trailing, its agile, athletic posture keeps up with the sprightly keyboard cadence in Manfred Mann’s Earth Band’s cover of Blinded by the Light, the cymbal-tapping galloping precisely and punctually alongside.

It’s an enthusiastic rendition that isn’t short of attack, and you can tell Sonos had only one thing in mind when engineering its sonic character: fun. And who can argue with that?

If you thought time would have aged the Play:1, think again. It remains a great-sounding wireless speaker, and a decent passage into multi-room for those on a tight budget.

Other rivals have emerged, and the Audio Pro Addon C3 is a worthy alternative, but if you're set on Sonos, the Play:1 is still a great bet.