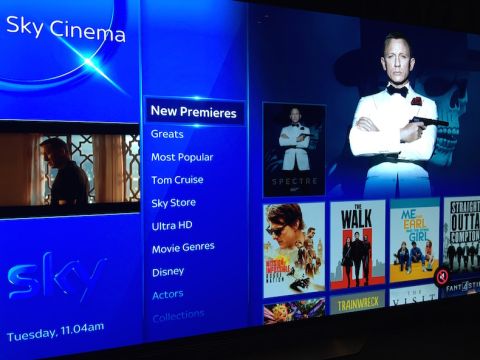 Sky's Ultra HD service offers one of the widest selections of 4K content you can experience.

But how does the service shape up, is the picture quality up to scratch and how convincing a proposition is it for those who don't currently subscribe?

If you own a Sky Q 2TB box (formerly Sky Q Silver), you can access live and on-demand 4K content through Sky's Ultra HD service.

Rather than a dedicated Sky 4K channel, all Sky Ultra HD movies, dramas and natural history programmes are on-demand.

Sky's live 4K broadcasts are mainly reserved for Premier League football and Formula 1, although Sky will extend its 4K sports coverage to cricket in 2017, starting with the England versus South Africa test series in July. Sky also broadcast the 2017 Isle of Wight Festival in 4K.

There are also 4K films. Sky Cinema launched in August 2016 with a total of 42 movie titles in 4K, and that number has been gradually increasing ever since.

Other Ultra HD movies are a mix of rentals through the Sky Store (available to all Sky Q 2TB subscribers) or free downloads from Sky's extensive catalogue. The list includes The Revenant, the entire Ghostbusters and Men In Black box sets, Minority Report, The Godfather, Jerry Maguire and the Spider-Man trilogy.

You can take your pick from a number of different Sky 4K TV series, including The Blacklist, The Young Pope, Riviera and Jamestown. These are available to download in 4K after they have been broadcast in HD.

Before we get stuck into how the Sky 4K content looks, potential or current subscribers with a Sky Q 2TB box need to be aware of a couple of things.

Sky Ultra HD comes with no additional charge, but you still need to subscribe to the relevant entertainment and/or sports packages. However, you can rent 4K movies through the Sky Store, even if you don't subscribe to these packages. New releases cost £7, while older library titles cost £6 to rent.

Only Sky Q 2TB boxes running Sky's latest software will be able to output 2160p resolution. You can only access 4K content through the 2TB Sky Q box - the standard Sky Q 1TB box isn't UHD-compatible, nor is the multi-room Mini box.

You can either set your Sky Q Silver box to output 2160p manually through the box's picture settings, or when prompted to change resolution the first time you attempt to watch 4K content.

It's worth noting that once you've swapped the resolution to 2160p, this will be the default resolution of your Sky Q 2TB box, even when you're not watching Sky UHD content. All standard-definition and high-def programmes will be upscaled by the box instead of your 4K TV.

Sky says it has done this to keep the user experience as consistent as possible and to prevent any loss of picture when your TV recognises a change in resolution.

In addition to enabling 2160p resolution, your Sky Q Silver box can also determine whether your 4K TV supports 8-bit or 10-bit colour will adjust its output settings accordingly.

Where available, Ultra HD content is one of the options you see in the sub-menus for relevant categories such as Sky Cinema, Sky Box Sets and Sky Sports. This option is easy to select using the touchpad remote.

Programmes are also flagged up as 4K via a small UHD logo in their preview panel at the top right corner of the screen.

Go to the Sky Sports channel showing Premier League Football, and you'll see a prompt to select the UHD broadcast.

4K content on Sky Q comes in two varieties. If you see the word 'Remastered' at the top of the programme preview page, this indicates the title has a master in a higher resolution than HD and has been upconverted in post-production and remastered to 4K resolution.

Anything that doesn't say 'Remastered' has either been recorded in Ultra HD or the studios (or Sky) have gone back to the original material and processed it with an Ultra HD workflow in post-production.

The Revenant is one such 4K title and it looks sensational. In the opening forest scene, ripples and reflections on the water appear realistic with plenty of detail. The sense of depth is also impressive as the camera peers through the trees into the distance.

Deadpool is another blockbuster that looks stunning on a compatible 4K TV. During the opening chase scene, the level of detail in his costume is superb, with even the finest of stitches visible.

The 'Remastered' titles show surprising levels of clarity and detail - you'd be forgiven for thinking older movies would struggle against newer fresher content. Robocop is 30 years old yet Sky's 4K version is by no means disgraced. The same goes for the original Ghostbusters movie.

Some of the models and special effects look a little raw, and the scenery gives the staging away, but by the same token, it makes the movies appear more authentic in an age where CGI can dominate and detract.

Sport in 4K looks inviting too. From the club crests on player shirts to the native 4K animations, you can pick out all manner of detail in the Premier League coverage. Switch between HD and UHD broadcasts and there's a subtle lift in the nuanced details displayed on your telly.

Sky's 4K Formula 1 content easily matches the football for quality. Details on the race helmets and the logos on the cars are clearly visible, and the shots of cars cornering are wonderfully stable and composed. From the night racing in Bahrain to the sun-drenched Monaco circuit, the consistency of the image is superb.

If you already own a 4K TV, a Sky Q 2TB box and subscribe to the relevant packages, the picture on your 4K TV will have never looked better.

It's hard not to be impressed by Sky's Ultra HD service. It has given the market a much-needed injection of 4K content, which will only grow over time.

Subscribing to all the relevant packages isn't the cheapest way to experience 4K, but in a market driven by content, Sky holds a lot of the cards. At the moment, rivals such as Virgin and BT can't really compete.

MORE: 4K streaming vs 4K Blu-ray vs Blu-ray - which is best?