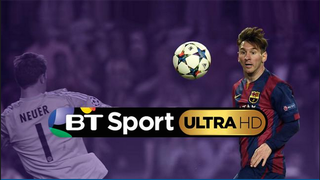 We went to Wembley for the FA Community Shield between Arsenal and Chelsea last Sunday to witness the launch of BT Sport Ultra HD, and to find out more about BT's plans for the 4K format.

MORE: How to watch 4K content on TV and online

BT is serious about Ultra HD

BT isn't playing around. If you didn’t get that from the £897 million the company spent securing rights for the next three years of UEFA Champions League and UEFA Europa League football, let this be a warning.

Being Europe’s first Ultra HD live sports channel isn’t just another notch on the bedpost. Road testing has taken 18 months, via eight live events, and BT Sport now has a shiny new TV truck and the first Sony 4K cameras and Fujifilm lenses of their kind, all for the sole purpose of delivering Ultra HD broadcasts.

This isn’t simply upscaling from existing HD, everything has been built for purpose. It is a lot of expense, but BT is aiming to ultimately streamline, using the 4K cameras and same truck for all broadcasts. Oh yeah, BT is planning long-term.

We're not going to beat around the bush, the picture is excellent. We've loved pretty much all the 4K content we've seen so far, and our BT Sport Ultra HD experience was no different.

In the BT Sport box at Wembley, BT ran HD and Ultra HD streams of the match side-by-side, and it was a telling comparison. 4K almost makes its HD counterpart look like standard definition (almost) and live football was one of the best demos we've seen.

BT says it wants Ultra HD to deliver a more immersive, but also more natural, experience for the viewer.

It would be easy for BT Sport to flex its muscles with a montage of extreme close-ups showing us what Arsène Wenger had for lunch, but the company plans to resist, letting the extra resolution enhance the game by itself. Which certainly sounds promising.

Ultra HD could actually be relevant to the progression of the sport, too. Of course he wasn’t going to speak ill of his new employers, but Rio Ferdinand believes the technology will be useful for professional sportsmen, too.

The capacity for the camera to pull out wider, allied with the ability to splice together more than one feed, means you can now see the whole pitch in greater detail, all at once – no place to hide for that out-of-position defender.

Simply having a better quality image, Ferdinand says, will give players a better idea of everything from how well they're striking the ball to how keenly goalkeepers are anticipating the movements of an opposing striker. Just be prepared for a whole new generation of armchair experts.

Will anybody be watching?

As well as the new BT Ultra HD set-top box, BT Infinity broadband connection and Entertainment Ultra HD package, you’ll need an HDMI 2.0 connection on your TV that supports HDCP 2.2 content protection and a picture resolution of 2160p (50Hz). All that means many older 4K sets and those from certain brands just won’t cut it.

There's a full list of BT Sport Ultra HD compatible TVs on the BT website, so it's worth checking before you take the plunge.

There isn’t much to watch. Yet.

And if you do take the plunge... don't expect to give up boring old normal HD again. As ever, the content looks likely to come in a trickle rather than a flood - though there is more than football (just).

August will see three Premier League matches, starting with the season opener between Man United and Spurs on Saturday 8th, plus Moto GP over the August bank holiday weekend.

MORE: BT Sport Ultra HD - everything you need to know

MORE: How to watch the Premier League online, on TV, on mobile