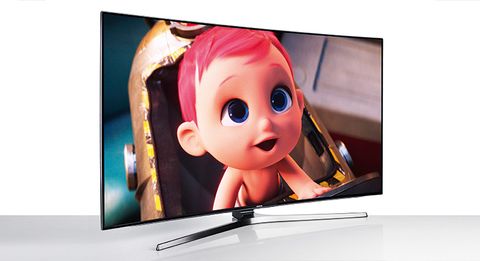 If you’re looking for a high-end, curved 4K television, the KS9500 ticks all the boxes

While Samsung may not totally subscribe to this philosophy – it still makes a number of excellent flat-screen televisions – the new 65KS9500 television is the just the latest in a long line from the company to boast a curved design.

Also available in 78in (just in case 65in isn't big enough), the KS9500 is the company’s top-of-the-range product and has much of the same character as other high-end Samsung TVs – a detailed picture, and punchy sound at the absolute highest level.

There’s no doubt that Samsung can build a slick television, but this is still a rather large set. So, whether it’s sitting on a stand, or mounted on a wall, it’s going to take up a sizeable amount of space.

But it will look good doing so. The KS9500 has the company’s “360 degree design” which makes its televisions as smooth as possible, unblemished by physical joints or screws on either the front or the back of the screen.

Round the back is a small panel that reveals an ethernet port for wired internet connection, though the KS9500 also has built-in wireless connectivity.

There’s also a USB extender for Samsung compatible ‘SmartThings’ like Google Home, and a port for Samsung’s OneConnect – a wired, external box for connecting source inputs, rather than having to plug them into the television itself.

It also has four HDMI inputs, three USB ports as well as connections for satellite and terrestrial cables, which saves you the hassle of going behind the television to access inputs, whether it’s on a stand or wall-mounted.

The KS9500 has good viewing angles for a curved television. Of course, we’d always recommend that you position the television so that it directly faces you, to ensure you get the best picture possible.

Speaking of the picture, the television features Samsung’s ‘Quantum Dot’ technology – a layer of nano-crystals one billionth of a meter wide, with each dot emitting a different colour.

In tangible terms, this improves the reproduction rate of picture colour over conventional LCD televisions, as well as overall brightness.

It's also worth noting that this particular set boasts direct LED backlighting, comapred to the majority of Samsung's 2016 TVs which are virtually all edge-lit.

In terms of usability, the KS9500 has the same Tizen operating system that we’ve seen on other Samsung televisions – two horizontal bars of sources along the bottom of the screen, the first for connected hardware like a Blu-ray player or games console, while the second is for online services.

The television comes with two remotes, a ‘normal’ one with numbers and four direction navigational buttons, and a smart remote with point and click functionality.

We found the standard remote design generally easier to use than the motion remote, however its lack of backlight does make it more difficult to use in darker rooms.

There are four picture presents immediately accessible in the settings menu: Movie, Standard, Natural and Dynamic.

These automatically change the picture’s warmth, brightness, and contrast, based on what Samsung thinks the optimum balance is.

We put the television into Standard setting and run the THX Optimizer disc. Once calibrated, we decide against using most of the extra processing modes, the only one we enable is motion smoothing, which helps reduce the judder in scenes with lots of movement.

We’d recommend only increasing this setting by one or two increments – any more and you run the risk of your image looking over-processed and artificial.

Streaming the first episode of Netflix’s Daredevil, it’s immediately noticeable the effect that not only HDR support has on the image, but the way that this television handles it.

The KS9500 reveals a lot of subtle features in the image without having to increase the brightness.

During a fight scene in the shadows, you can see the stitching of Matt Murdoch’s makeshift costume when the camera moves close, and make out the lines of architecture in the backdrop when the light rises.

Where lesser televisions would simply leave those parts of the scene in darkness the Samsung illuminates them, making Hell’s Kitchen feel a little more real.

When Murdoch collapses to his knees after taking a particularly brutal punch, the blood from his mouth mixing with the rain running down his face, you can make out the subtle blend of red in the translucence of the water.

Moving to something more colourful, the Blu-ray of Guardians of the Galaxy, there’s a strong contrast between the bright white sparks of gunfire and the dank corners of the interstellar prison ship.

In a scene so heavy on CGI, the Samsung still manages to keep the picture looking realistic, even at HD quality.

The fire of the flying robots has a range of warm colours, from the deep reds in the centre to the flickering yellows around the edges. It’s a very natural image, even when showing the talking, machine-gun toting racoon climbing the giant living tree.

This remains the case on standard definition broadcast television, with the KS9500 doing an impressive job of upscaling the content. Skin tones are still well balanced without any obvious smoothness or softening of the colour range.

The KS9500’s down-firing speaker and tweeter combo sounds clean and packs a punch when necessary.

Putting on Captain America: The Winter Soldier, there’s a sense of excitement and vibrancy in both the soundtrack and sound effects when the titular superhero storms the military ship.

When Steve Rogers’ fist connects with an enemy combatant it sounds weightier than what we’ve heard from other televisions, and the clang of his shield hitting metal is notably dynamic.

The backing soundtrack, too, seems to have been given an extra jolt of electricity and this television’s sense of timing has no issue conveying the momentum of the scene.

The KS9500 meets all our expectations about Samsung’s premium line. It’s got a great picture on all sources, is easy to use, with solid sound quality.

This is Samsung’s highest quality television, and amongst the best LCD picture we’ve seen all year. If you’re looking for a top-class image, you should feel no qualms about paying the premium – rest assured, you’ll be getting it.