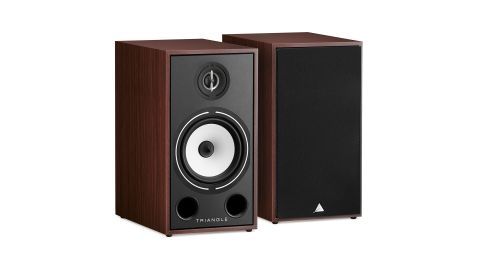 It’s rare to find a pair of speakers at this price that sound so sophisticated, but these Triangles deliver refinement and detail in spades

At this level, the speaker market is an intimidating place to be. Many of the usual suspects, including B&W, KEF and Mission have plenty of five-star speakers to offer, with a select few even having a What Hi-Fi? Award to their names.

As with any pair of new speakers, it pays to get to know the Triangle Borea BR03s and their preference for placement. Triangle recommends a minimum of 2m between speakers and also between them and your listening position. It also suggests placing them at least 40cm away from a back wall and 50cm from a side wall.

And we have to agree. Even though they’re front-ported, these Triangles don’t shine quite as much when placed up against a wall. They will certainly do a job, but the overall balance and stereo imaging suffer. With room to breathe and a little toe-in to shore things up, the Borea BR03s are able to perform at their very best.

The Triangles deliver a huge sense of scale, much larger than rivals such as the formidable B&W 607s. They can also boast impressive separation and precision.

There’s detail and insight across the frequency range and, given their size, the quantity of bass is perfectly acceptable. There’s plenty of weight to the relatively simple, yet hefty bassline that accompanies Eminem’s No Regrets. Some might lust after a more musclebound delivery, but it’s the detail and quality of bass that gives the Triangles an edge over many rivals at the money. There’s texture in spades.

The Boreas also demonstrate an excellent sense of timing. There’s plenty of precision and no trace of lag as Nina Simone’s My Baby Just Cares For Me trots along. The snare drum and piano sound like they’re having plenty of fun in each other’s company.

There’s a nice tonal balance to the delivery, which is careful and considerate –sophisticated, even. In the past, we’ve tested some Triangle speakers that have sounded hard and bright in the treble, but that’s not the case with the Borea BR03s.

Bruce Springsteen’s Terry’s Song has a raw, demo-like quality to it. If the Triangle’s were going to sound bright then this track, whether it’s the vocal, guitar or piano, could rumble them. But to their credit, the Boreas take it all in their stride.

There is a very slight peakiness to the treble, but nothing that would deter us. We’d simply recommend you refrain from partnering the Triangles with bright-sounding electronics.

So, what kind of amp would work well? During testing, we partnered the speakers with the Cambridge Audio CXA61 (£750 / $999) and had a great deal of success. The Boreas immediately sound at home, their expressive and insightful character gelling well with the CXA61’s punchy and dynamic demeanour.

A more affordable alternative might be the Marantz PM6006 UK Edition.

The BR03s are the largest of two pairs of standmounters in the Borea range. They stand 31cm tall and feature a 25mm silk dome tweeter sat above a 16cm midrange/bass paper driver.

The twin-pronged diffuser appears to be pinching the silk dome, but look a bit closer and it’s just hovering over – it’s there to help reduce the directivity and improve the dispersion of high frequencies. Beneath the mid-bass driver sits a pair of bass reflex ports.

Our black review pair looks pretty punchy in the flesh, mainly thanks to the contrasting colour of the mid-bass cone, the silver trim that runs through the driver’s surround, plus that eye-catching diffuser.

To some, the front of the speakers may look a tad unbalanced, with the ports a little cramped next to the mid-bass driver. However, with the magnetic speaker grilles, there is always the option of covering them up.

The Triangles are single-wired speakers and you’ll find a neatly finished pair of terminals for 4mm banana plugs on the rear of each cabinet. Besides our black review sample, there is also the choice of white or walnut.

It’s not often we stumble across a pair of speakers at this price that sound as sophisticated as the Triangle Borea BR03s.

For the money, they’re savvy musical performers with a great sense of scale and an even greater appetite for presenting music in a transparent and mature manner. But are they speakers capable of worrying the current class-leaders? Most definitely.