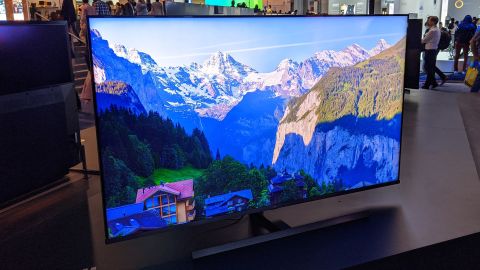 The TCL 8 Series Vidrian Mini-LED 8K TV is the new flagship TCL TV for 2020. Building on last year's Mini-LED TVs, TCL has added 8K resolution into the mix, and upgraded its 'glass on LED' Mini-LED panel tech. And it's clear the company means business now at both the premium and budget ends of the TV market.

Depending on when you looked last year, TCL was either the number one or number two TV brand by volume in the US, vying with Samsung for the top spot. The company has spread its wings, too, coming to the UK and Europe, primarily with its price-focused, ultra-competitive LCD TVs.

But the TCL 8 Series, new for 2020, proves the Chinese company wants a chunk of the premium market, too, launching headline-grabbing TVs packed full of the latest screen technology and, most likely, still surprisingly affordable.

Vidrian is the name of the new top-of-the-tree TCL TV range, which combines the company's latest version Mini-LED panels with 8K resolution – and Roku TV Ready certification for good measure.

We took a long hard look at the new TCL 8K Mini-LED TVs on the CES show floor to see how we think they'll measure up.

It's not exactly easy to make a huge slab of screen stand out from the crowd. As the TV industry continues to deliver ever-bigger screens with super-slim chassis and ultra-thin bezels, it doesn't leave a lot of room for design flourishes.

With that in mind, those looking to be impressed by futuristic-looking TVs at CES would be hard pressed to get too excited by the appearance of the TCL 8 Series. The bezel is small, TCL referring to the design as "Full View", but no match for the bezel-less Samsung, and the stand is nothing much to write home about (there are actually two different versions for the US and international markets).

Instead, TCL would rather let the set's impressive specs get you hot under the collar.

TCL's Mini-LED TVs use Quantum Dot and LCD technology, fusing tens of thousands of LED backlights and circuitry directly into the glass substrate of the panel ("Powered by Mini-LED on Glass Technology"). This fusion of light and glass aims to minimise the filters between the backlight and LED, to help boost brightness and overall clarity.

The Mini-LED (not to be confused with MicroLED) boosts the possibilities of local dimming beyond ordinary LED TVs and should allow for more subtle shading and a better sense of depth to the image. TCL says their Vidrian panels also improve contrast, luminance and create longer lasting performance.

These 8K Mini-LED TVs come in 65in and 75in panel sizes and will be on sale in the US and beyond later this year. There's no word on more concrete pricing or release dates as yet but we were told by a TCL spokesman they "wouldn't be an arm and a leg", suggesting they're likely to be priced deliberately very competitively. No surprise from TCL.

The TCL Vidrian TV supports "8K HDR", Dolby Vision and HDR10+ video, with the Mini-LED and QLED combination designing to deliver punchy bright colours alongside darks to rival OLED. TCL was happy to put its 2019 Mini-LED on display next to an OLED, in fact, and it certainly appeared more than a match, albeit with all the caveats that must be applied in such instances.

TCL is eager to please gamers, too, with a dedicated Auto Game Mode, a 120Hz Game Input and a variable refresh rate.

As well as the Roku TV smart platform, the TCL 8K Mini-LED TV range works with Alexa and Google Assistant voice assistants, too.

All the signs suggest the TCL 8 Series will be very competitive if you're eager to be an ultra-early adopter of 8K TV, if only based on expected price against that feature set. There's only so much you can discern on a trade show floor with TVs on demo reels of eye-poppingly bright, and impressive, slow-motion material, but it was certainly easy to be impressed by what we saw.

The argument that this Mini-LED technology marries the deep black levels of OLED with the brilliant bright colours of QLED is a tempting one and there was no denying the stop-in-your-tracks lustre to colours and depth to dark scenes.

Motion seemed smooth, albeit the content was far from challenging, and the picture seemed realistic and just-about-natural, despite repeated punchy explosions of colour. Watching in a bright hall, no doubt with the TVs on a similarly 'vivid' or 'cinema' mode, it's inevitable that bright whites especially look a little piercing and unreal but with TV and movies on a calibrated set, there's no reason to think this can't be dialled back to reality a touch.

On paper and in the flesh, it's hard not to be excited by what TCL might deliver with these Mini-LED 8K TVs. Of course, despite the huge amount of noise around 8K TV at CES this year, we know watching 8K content feels a long way off.

But as a statement for where this Chinese TV brand wants to go, and what we have to look forward to from TV tech in the not-too-distant future, the TCL 8 Series Mini-LED TVs have turned our interest right up to maximum.