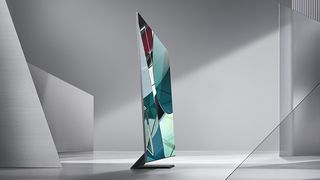 Samsung has confirmed its flagship 8K QLED TV for 2020, which launches with a new Infinity design that "eliminates the screen bezel". Samsung's 8K TV claims to be able to use up to 99% of the screen, while also measuring just 15mm thin and sporting a completely flat back panel.

Following last week's leaks, this year's Samsung 8K TV appears to be called the Q950TS (according to the image file names), following in the footsteps of the Q900R and Q950R 8K TVs.

The Q950TS uses a new AI quantum processor promising enhancements to the picture, sound and smart TV features. A key area of improvement is said to be the upscaling of lower resolution content to fit the 8K screen, which is very necessary ahead of the broad availability of 8K content. That said, the 2020 Samsung 8K QLED will be able to stream 8K video from YouTube, thanks to support for YouTube's 8K AV1 codec.

One of the key benefits and improvements over the current ATSC 1.0 standard of 'NEXTGEN TV powered by ATSC 3.0', as Samsung is calling it, is its potential to receive and playback content in up to 4K resolution, rather than just Full HD.

Back to the new 8K QLED, and another new feature is Adaptive Picture, which promises to optimise the picture's brightness and contrast according to the amount of light in your room. AI ScaleNet meanwhile will specifically work to maximise picture performance when streaming from Amazon Prime Video.

There are sound upgrades, too, with a focus on object-based audio, which is the technology at the heart of Dolby Atmos and DTS:X. Samsung's OTS+ (Object Tracking Sound Plus) claims to recognise moving objects on the screen and will move the sound around accordingly, more accurately tracking how a helicopter moves across the screen, for example.

Samsung Q-Symphony promises to combine both the TV and soundbar's speakers for the best possible sound in up to 9.1.4 channels of audio, while AVA (Active Voice Amplifier) allows the TV to recognise ambient noise and adjust the volume accordingly. No more missed dialogue?

When it comes to connecting to other devices, the new 'Tap View'  feature allows users to mirror their smartphone to their TV, while the 'Digital Butler' function will allow the TV to recognise and control not only devices connected via Wi-Fi or Bluetooth but also, somehow, older non-smart devices.

And for voice control, in addition to Samsung's not-so-popular Bixby, Amazon Alexa and Google Assistant are also available on this Samsung 8K TV.

Samsung is delivering the main CES 2020 keynote on Sunday 5th January where it is expected to reveal more details on its 2020 product line-up.