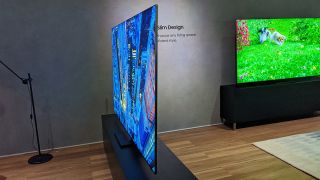 Samsung knows how to make its presence felt at trade shows, so you can always expect plenty of product news, bold pronouncements and normally a few surprises when it comes to the Samsung CES press conference.

The show may have lost some of its lustre in recent years as the big tech brands increasingly opt to host their own launch events throughout the year, but for setting the scene for the year ahead, and particularly when it comes to the TV tech world, there's still much to be learned from events at CES.

Samsung's CES 2020 press conference and product announcements have certainly given us plenty to look forward to in the coming months and beyond, and given us a better idea of the tech giant's plans for the future. Read on for our Samsung CES highlights.

8K TV has been a real trend at CES, with the likes of LG, Sony and TCL all leading their TV line-ups with 8K resolution screens, and Samsung was no different.

Samsung's 2020 8K TVs will be the company's third-generation models and with demand last year reportedly surpassing the company's expectations, there will be not one but two Samsung 8K TV ranges to choose from this time around. What's more, Samsung is being bullish about price, suggesting the cheaper range will be priced in line with the premium 4K models.

Vertical TV is a thing

Samsung Sero, the TV that can rotate from horizontal to vertical, is back in 2020. Launched in Korea last year, the TV aimed at TikTok-ing millenials (it was Instagram last time), is now set for a wider release, coming to the US next and then perhaps the UK and Europe.

The Samsung Sero TV has a built-in, non-removable stand that gives it enough clearance to not hit the floor while rotating to vertical mode. Samsung Galaxy owners can start screen mirroring from their mobile device by tapping it against the Sero's frame. And it supports AirPlay 2 so iPhone owners can send their vertical videos to the screen, too.

The idea makes for a catchy headline, and it's a neat trick to pull, but we're not sure this is really a TV that young people are crying out for - or indeed can afford. We look forward to being proved wrong.

Filmmaker Mode promises to deliver the cinematic experience on your TV exactly as intended by the director. Following something of a backlash from Hollywood against over zealous picture processing, this viewing mode will override a TV's processing, such as motion smoothing and detail enhancement, and ensure that the film is presented in the correct aspect ratio, colour and frame rate.

Samsung is on board, as is almost every other TV brand and plenty of studios, so it looks like this should be a smooth launch (no pun intended). Could Filmmaker Mode be best thing to happen to TV in 2020? And if it proves successful, where does it leave all the picture processing tech of which TV companies are so fond? While we're intrigued to see how it works out in reality, based on our previous experiences of out-of-the-box, one-size-fits-all picture settings, we're maintaining a healthy scepticism.

TV and soundbar in perfect Q-Symphony

It may be almost all about TV, but it's not all about the picture. Samsung is ramping up its efforts to improve TV sound, too.

Q-Symphony sees Samsung’s 2020 QLED TVs working with the Q-series soundbars in an effort to deliver a more immersive audio experience. Rather than the TV speakers being mute when the soundbar is connected, they will be used alongside the drivers in the soundbar. Intriguing. Will it sound better or just louder? Is it just another way to try and tie you to the brand's products?

With Samsung also launching Object Tracking Sound, or OTS+, to better represent the direction of sounds on screen, and Adaptive Sound+ to boost your TV's volume when it hears ambient noise, Samsung clearly has half an eye on the other half of the home entertainment package in 2020.

Artificial Intelligence is a popular go to topic for CES press conferences and Samsung wasn't alone in dedicating a sizeable chunk of its event to AI. More intelligent and more useful, thanks to connected ecosystems of AI products, is the future - albeit we've been hearing this for a few years now. And of course things are getting smarter but perhaps at not quite the rate often presented, and only for a small majority of people.

H.S. Kim, Samsung Consumer Electronics President and CEO, introduced Samsung’s latest robot, an over-sized tennis ball called Ballie, which "understands you, supports you, and reacts to your needs to be actively helpful around the house". Or at least follows you around your home with a camera, albeit always cleverly keeping its distance (and "maintaining stringent data protection and privacy standards").

The robots are most definitely coming, but for now, maybe we'll just settle for one of Samsung's stunning bezel-less 8K TVs instead...