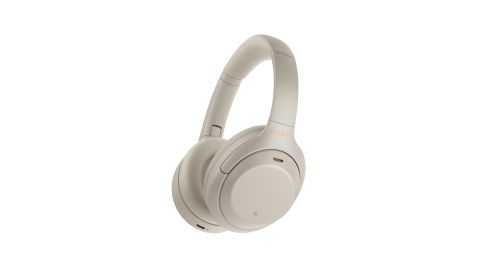 We’re not exaggerating when we say the arrival of the Sony WH-1000XM4 wireless noise-cancelling headphones is probably the biggest headphone launch of 2020.

Why? Well they just happen to replace the Bose-baiting, Sennheiser-slaying, What Hi-Fi? Award-winning WH-1000XM3s, one of the most popular pairs of headphones on the planet. They’re quite a big deal.

Instead of just rebadging the old model and changing the ‘3’ to a ‘4’, Sony claims the WH-1000XM4s deliver a more comfortable design, better noise-cancelling, better audio, better call quality and more useful features compared with their predecessors. If they live up to all that, we’re in for a treat; but if they don’t, this could all end in tears.

Sony hasn’t exactly gone back to the drawing board for the WH-1000XM4 over-ear headphones (if it ain’t broke etc…), but you will notice a few subtle differences here and there. The first one relates to the plastics used around the earcups and sliders. Things feel slightly more textured compared with the smooth surfaces of the XM3s; in our opinion, this helps give the impression that they are slightly sturdier. They still don’t, perhaps, look as premium or stylish as a pair of B&W PX7 or Bose Noise Cancelling 700s, but they certainly give the impression that they’re built to last.

The WH-1000XM4s use the same 40mm drivers found in the previous model and the finishes are the same too: Black or Platinum Silver.

There have been changes to the ‘hangar’ section of the headphone (the hinged fork that hangs down and connects to the earcups). The gap between the hangar and the cups has been shrunk, creating a more seamless appearance, and the space where they connect to the earcups has been reduced to reduce the potential for any sound leakage. Speaking of earcups, the WH-1000XM4s are a thinner design, while the pads used are softer and actually 10 per cent larger than those used on the XM3s. The head cushion is also slightly slimmer. Overall, the XM4s are lighter by one whole gram, too (254g vs 255g).

All these factors combine to produce a very comfortable fit. There’s just enough pressure to grip your ears and get a solid seal around them without the headphones feeling too loose. Because the grip isn’t as vice-like as some rivals, though, and the fact the headphones still don’t have an IP rating (for water and dust resistance), we wouldn’t recommend using them during exercise.

The power button, a USB-C charging port and 3.5mm headphone socket have all carried over from the XM3s. So too has the Ambient/NC (noise-cancelling) button, though it’s been renamed ‘Custom’ on the XM4s. The name might be different, but it carries out all the same duties as before, such as switching between noise-cancelling and Ambient Sound modes and running the NC Optimiser.

And you’ll need to run Sony’s NC Optimiser before you use the headphones for the first time. If you’re not familiar with this software, it’s basically an auto-calibration program that is activated via a long press of that Custom button. They optimise the noise-cancelling based on different factors such as the shape of your face and whether or not you wear glasses. If you’re a frequent flyer they can even take into account changes in air pressure.

The headline feature for the WH-1000XM4 is the introduction of a brand new sound processor. Sony has switched from DSEE HX to a new DSEE Extreme engine. The new engine not only attempts to upscale compressed music to near hi-res quality, it also adds artificial intelligence technology called Edge-AI. It’s been developed with the help of Sony Music Studios Tokyo to analyse music in real-time to reproduce a more accurate sound, more faithful to the original track.

There’s no aptX or aptX HD support, but the Sony’s are compatible with its own LDAC technology. This allows you to stream high-quality audio wirelessly from a compatible source, including select Android smartphones running Android 8.0 or above. If you subscribe to a streaming service that supports tracks encoded in Sony 360 Reality Audio, the WH-1000M4s can also be used to experience the immersive audio format.

The Quick Attention feature found on the XM3s, where you can cover the right earcup with your hand to hold a conversation, carries across, but Sony has taken the conversational skills of the WH-1000XM4s to a whole new level. You can now engage ‘Speak to Chat’, a feature that allows you to talk to someone while the headphones are still on your head, all without moving a muscle.

The headphones recognise that you are talking and will stop playback and switch to their Ambient Sound mode automatically. It’s a neat party trick and we find it works pretty well. There is a slight delay, though, between when you start to speak and the mode kicking in, that we’d like to see shorten. Helpfully, you can set the sensitivity of Speak-to-Chat in Sony’s Headphones Connect app to try and stop it going off accidentally. There are a couple of occasions when we trigger the feature with a cough and an enthusiastic sing-along, but you can just slide a finger up or down on the right touchpad to go back to your music.

Another new feature for the 2020 model is ‘Wearing Detection’. The headphones use a proximity sensor and acceleration sensors in each ear cup to pause playback when you remove the headphones, and then to automatically start playing again when you put them back on. It’s a feature we’ve come across in other headphones before, such as the B&W PX7, and it’s nice to have.

Sony has also given its Adaptive Sound Control feature a boost for the WH-1000XM4s. The XM3s could work out whether you were travelling or stationary and adapt their sound settings to suit; the XM4s can actually use location learning and GPS data from your phone to change the noise-cancelling and ambient sound levels based on particular locations. The one slight drawback is that if you lose the GPS signal the headphones won’t be able to change their settings automatically. But you can set up profiles and geo-fence certain areas using the Headphones Connect app, so the WH1000XM4s will automatically switch modes when you enter them.

One criticism of the WH-1000XM3s was the inability to connect to more than one device simultaneously. This has been rectified for the WH-1000XM4s thanks to their new ‘Multipoint’ feature which was enabled in a firmware update released shortly after their launch. You're now able to switch between two Bluetooth-connected devices.

Sony has also focused on getting the WH-1000XM4s to sound clearer during voice calls. They use something Sony refers to as Precise Voice Pickup technology, where the headphones control the mics and use signal processing to make voices sound clearer and more precise. And it works. We feel that voices sound more vivid when using the new headphones.

Battery life remains among the best in class, with a full charge lasting up to 30 hours with both Bluetooth and noise-cancelling enabled. This rises to 38 hours if you sacrifice the noise-cancelling. Charging the headphones with an AC adapter will give you five hours of battery life from just a ten-minute burst of power.

Sony has been making waves in the noise-cancelling headphones market for a few years now, and it claims the WH-1000XM4s are able to cancel out more midrange and high-frequency sounds than ever before. Its HD Noise Cancelling Processor QN1 uses a brand new algorithm and works in tandem with a new Bluetooth System on Chip (SoC). Together, they are able to constantly monitor audio and noise signals, plus the relationship between the speaker drivers and your ears. This is all happening in real-time, a first for Sony headphones, and the technology is claimed to give greater control over how the noise-cancelling performs.

We’re pleased to report that all this tech-speak translates into a hugely impressive noise-cancelling performance. You feel isolated from the outside world, which leaves you free to enjoy the music being fed into your ears. The Sonys have no trouble cutting out unwanted extraneous noise, from the rumble of a train as you pass under a railway bridge, to the hustle and bustle of a busy high street.

So it’s all good news as far as comfort, noise-cancelling and features are concerned, but how do the WH-1000XM4s stand up to sonic scrutiny? The answer is exceptionally well.

Sony’s DAC and analogue amplifier combination worked extremely well in the XM3s and it impresses once again here.

Listening to a wide range of tracks, it’s soon apparent that Sony has somehow managed to squeeze out even more performance from the WH-1000XM4. The soundfield appears wider, with the headphones able to use the extra headroom to uncover even more detail. The WH-1000XM4 sounds more composed and confident, especially when it comes to lower frequencies. There’s power, punch and a sense of poise that makes the WH-1000XM3 sound, dare we say it, a little tubby.

Play Ramin Djawadi’s cover of The White Stripes’ Seven Nation Army and the clarity and definition of the strings really shines through. There’s a newfound smoothness in the treble that makes the old model sound a tiny bit unrefined in comparison. The song’s powerful bass notes help drive home the track’s intensity, leaving a lasting impression on the listener.

Sony’s WH range has consistently set a benchmark for timing and dynamics and the XM4s continue this trend. The headphones communicate dynamic shifts, the jumps from quiet moments to loud ones, with ease. Their ability to slot into the groove of a track and follow it faithfully means they can entertain you with the most basic of beats and then make the switch to more complex arrangements without a second thought. Their sense of enthusiasm, pace and agility means they’re as happy charging through The XX’s I Dare You as they are getting to grips with the complexities of Radiohead’s 15 Step.

Switch over to Click by Charli XCX and a dramatic synth rift lays the foundation for the track, followed by a pristine vocal that hangs against a backdrop of subtle, sparkling percussion. The Sony’s make any music you send their way sound interesting from the first note, all the way through to the very last.

We weren’t sure if Sony could improve on the XM3s, but somehow the WH-1000XM4s have managed it: they’re as comfortable as ever; they introduce useful features that elevate the user experience; and, more importantly, you’re getting a serious hike in sound quality for the money.

Their sense of musicality and enthusiasm remains as addictive as ever, but you can also hear big improvements across the board. We’re in no doubt these sensational Sony headphones will be tough to beat.