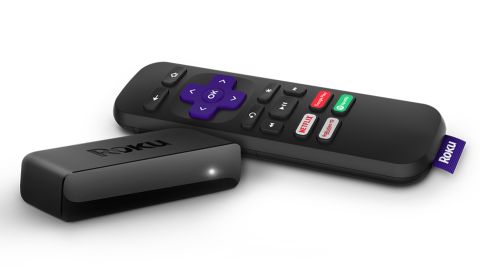 It might make sense on paper, but the Roku Premiere’s picture performance is poor enough to ruin film night

When searching for a video streamer, some people may primarily consider the specs and the price, with little regard for potential performance. ‘Does it give me access to apps that my TV doesn’t have?’ is the only question that needs to be answered before they press the ‘buy now’ button. After all, performance shouldn’t differ much between streamers, right?

If you go down the apps-per-pound route, the Roku Premiere will appear high on your list of prospective purchases, not least because it gives you access to Apple’s unparalleled library of 4K HDR films. But approach things from a performance-per-pound position, and it shouldn’t appear on your list at all.

The Roku Premiere is physically odd. Compact and light, you wonder why Roku didn’t choose to make it a neat little stick. Instead it looks like the front piece of a streaming box that’s been cut in three. It doesn’t even have the weight to stand flat on a surface, instead it dangles out of your TV at the end of a bundled HDMI cable, with a USB cable and wall plug providing power.

The only other thing in the box is the remote, a pleasantly ergonomic affair with a stripped-back selection of buttons that includes dedicated shortcuts for four major apps (in the UK, that's Netflix, Google Play Movies & TV, Rakuten and Spotify). The remote requires line of sight to work, which is a shame when you consider that the design of the Premiere otherwise encourages you to hide it away. It doesn’t have a microphone for voice control, either.

Both of those issues can be overcome by downloading the Roku app, which you can use to send touch and voice commands via the internet. You can also use the app to turn your phone into an audio receiver that enables private listening via headphones: useful if you want to listen privately without connecting your headphones directly into your TV.

The rudimentary design and low price hide a spec sheet with some strong highlights, with Apple TV taking pride of place in the app selection. Whether you’re interested or not in the new Apple TV+ streaming service, Apple TV also gives you pay-as-you-go access to the best selection of 4K HDR films available. If you own a 4K HDR TV, you really want Apple TV in your life.

But there are plenty of apps besides that. Netflix and Amazon Prime Video are both here in 4K HDR form; BBC iPlayer, ITV Hub, All 4 and My5 mean the major catch-up services are all covered; Rakuten and Google Play Movies & TV give you more pay-as-you go streaming options, albeit not in 4K or HDR; Now TV offers subscription-free access to Sky content, including sports; Plex makes it easy to play you own network-stored files; and Spotify, Tidal, Deezer and TuneIn give you plenty of options for music, podcasts and radio.

The only HDR format supported is HDR10, which is a shame. A lack of Dolby Vision and, to a lesser extent, HDR10+ might be an issue, but we suspect that the absence of HLG will prove the bigger disappointment to most Premiere buyers in the long run, as that’s the BBC’s format of choice.

But the Roku Premiere’s real problem is its picture performance. In the past, video streamers had a rather computer-like quality to their performance, but these days you can buy budget examples (the Amazon Fire TV Stick 4K, for starters) that deliver a proper, cinematic picture. Sadly, the Roku is not one of those.

It is blunt, unsubtle and rough. Play It via Apple TV and the colours are garish, overblown and lacking any subtlety of shading, particularly in the brightest parts of the picture. The film has a warm, vibrant palette in its daylight scenes, but the Premiere bumps this up to comic book-like unrealism.

Black detail, meanwhile, is close to non-existent, leaving you completely lost in the regular dark scenes – action scenes in the sewers are virtually impossible to make sense of.

At the same time, edges are crudely drawn and indistinct, details blend into one another and motion exhibits significantly more judder and blur than you get from rival devices. All told, it’s a really rather unpleasant viewing experience that’s a long way from the quality offered by the Apple TV app on other devices – so much so that you’d think you were watching a lower quality video file.

Netflix, unfortunately, is no better. Play Lost In Space and the same issues are present. The lack of subtlety to colours is particularly pronounced, with skin tones proving patchy and unnatural in their shading and clear banding evident in the sky of the alien planet.

Drop down to a standard dynamic range (SDR) show, such as The Good Place, and the story is thankfully somewhat improved. Motion is still a problem, with the blur proving distracting at times, and there’s a fizz to edges that the best avoid, but colours are much less of a problem and a good deal closer to natural. It’s not an amazing picture, but it’s not terrible.

The Roku Premiere isn’t nearly as weak in the audio department as it is in with video, but it’s not amazing, either. Play some music via Tidal (Roku’s Tidal app maxes out at ‘Hi-Fi’ quality so won’t play ‘Masters’) and there’s decent punch, clarity and overall balance, with nothing that sticks out in an unpleasant way.

However, it lacks a bit of solidity and richness, with the sound coming across a little lightweight. Dynamics are weak, too, both in terms of the low-level subtleties that reveal the nuance in a track and the big shifts that generate drama.

Those issues around richness and dynamics continue to be an issue with films and TV shows, with voices lacking a little natural warmth and set pieces falling short of generating maximum excitement.

Anyone who thinks all streamers are born equal should take a look at the Roku Premiere. This is a small, affordable device that promises much on paper, but falls a long way short of the performance of the best in class.

In fact, it falls a long way short of offering an acceptable 4K HDR performance, with the garish colours, murky blacks and lack of detail more or less ruining what should be a fabulous viewing experience.

For just a little more money, you can buy a proper little video streamer in the form of the Amazon Fire TV Stick 4K. Unfortunately, the Roku isn’t good enough at any price.