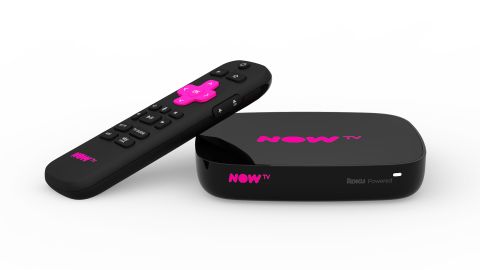 Unless you specifically need a streamer with Netflix in 4K, the Now TV Smart Box makes less sense than the cheaper Smart Stick

Now TV claims its Smart Box is the ‘lowest priced 4K streaming device in the UK’, which sounds great. That price (£46) certainly makes it sound like a bargain. But before you whip out that bank card, you should know that the only content the Now TV Smart Box delivers in 4K is that from Netflix.

Given the ubiquity of Netflix in 4K, we can’t see that being a major reason to buy the new Now TV Smart Box. Instead, the promise of subscription-free Sky content is the real draw again, even if it is at a paltry 720p resolution.

In keeping with the general approach of Now TV, the new Smart Box itself is a simple little device. Measuring 12.5cm x 12.5cm and standing just 2cm tall, it can be squeezed in almost anywhere. And, thanks to the remote not relying on line of sight, it can be hidden away in a cupboard or behind the TV.

The remote is really quite nice. The soft-touch matte finish combines with decent ergonomics to make it feel pleasant in the hand, and the buttons are both tactile and satisfyingly clicky.

On the back of the box you’ll find ethernet and HDMI connections and a microSD card slot. The latter allows you to expand the storage capacity for more apps, although given the limited selection on offer, we can’t really see the need.

That selection includes Netflix, YouTube, iPlayer, ITV Hub, All 4 and My5, but not the likes of Amazon Video, Google Play Movies & TV, Spotify or Plex. You’d expect a dedicated streaming box to have a broader range of apps than most TVs, so the gaps are disappointing, particularly in the case of Amazon Video.

But the Now TV Smart Box isn’t really intended as a do-it-all video streamer: it’s more of a vehicle for subscription- and dish-free Sky content, with Netflix and others an added bonus for those with TVs that don’t already have it.

That Sky content is purchased on a category-by-category basis in ‘Passes’. A Sky Cinema Pass (£10) gives you a month of access to Sky’s selection of movies, for example, while the Entertainment Pass (£8) includes exclusive Sky programs such as Game Of Thrones and Ballers. There’s also a £4 Kids Pass and £4 “Hayu” (reality TV) Pass.

For many people, the Sports Pass will be most appealing. It gives you access to all of Sky’s exclusive sports programming, from Premier League to F1, Masters golf to NFL, cricket and boxing, all available via the Now TV Smart Box.

Predictably, the Sports Pass is more expensive at £34 per month. Shorter passes, starting at £8 per day are available, which makes a perfect option for the occasional big match.

Subscribing to the whole lot costs around £60 per month, which is slightly cheaper than ‘proper’ Sky, doesn’t tie you into a contract, or require a satellite dish. If you don’t feel the need to have access to all that content all the time, then buying a Sports Pass for the odd Premier League weekend and an Entertainment Pass when a new, blockbuster show appears could be an ideal compromise.

All the apps and channels are wrapped up in a menu system that’s basic but straightforward. There’s also a voice control function that, while consistent in terms of comprehension, is limited to searching results from Sky and Now TV.

While the Now TV Passes give you access to an admirable amount of content, the resolution it streams at is a disappointingly low 720p. That has a pretty major impact on picture quality.

Colours are nicely judged though, and you get natural skin tones, realistic shading and decent vibrancy when it’s called for.

Interestingly, some content seems to look better at the lower resolution, with the live NFL game between the Raiders and the Seahawks looking sharper and punchier than the on-demand stream of Fantastic Beasts. You won’t mistake it for 1080p or 4K, but it’s worth knowing that not all content looks tatty in 720p.

Of course, the non-Sky content isn’t limited to 720p. BBC iPlayer’s 1080p programs are a significant step-up in terms of sharpness and detail, while Netflix’s 4K HDR selection is beautifully crisp and dynamic when viewed on a compatible TV.

On the subject of BBC iPlayer and 4K, it’s worth pointing out that the Now TV Smart Box doesn’t support HLG, so if the BBC’s future 4K streams use the same technology as its World Cup and Wimbledon streams, this box won’t make the most of them.

All video content is accompanied by pretty accomplished audio. The Smart Box can handle DTS and Dolby Digital Plus signals with up 7.1 channels, although it depends on the source being used. For example, some Netflix titles output 5.1 surround sound, but all of Sky's Now TV content is still only delivered in stereo. When the box does get the opportunity to output Dolby Digital, it delivers audio with good detail and clarity, and a surprising degree of dynamic flexibility – certainly enough to deliver an exciting action set piece if connected to a decent, dedicated sound solution, such as a soundbar.

The new Now TV Smart Box is being marketed on its 4K capability, but in reality that is something few will find of value. If you already have a 4K TV, the chances are that it already has Netflix in 4K built-in. If you own a 4K TV without Netflix in 4K, then this is one of the most affordable ways to add it.

For most people, though, the draw here will be the subscription-free Sky content. But while that content is limited to 720p, there’s little reason to buy the Now TV Smart Box over the £15 Now TV Smart Stick.

It is a little faster in use and produces a marginally crisper picture in some instances, but most of what you’ll watch will look interchangeable on the two devices. All of which means that, unless you specifically need a streamer with Netflix in 4K, you might as well save £30 and buy the Stick instead.

22 of the best TV shows to watch on Netflix