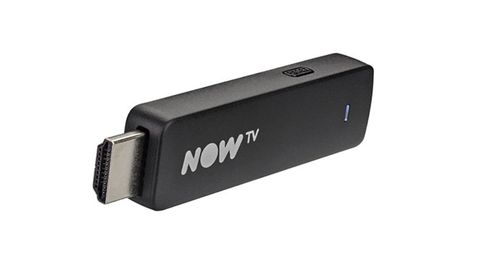 The Now TV Smart Stick is a product with one simple purpose: to provide you with inexpensive access to content from its parent company, Sky, without the expense of an ongoing monthly subscription.

The great thing is that it can also turn your old TV into a smart TV, with catch-up apps for all the major UK channels, as well as YouTube.

It doesn’t have the bells and whistles provided by its more advanced rivals, such as the Amazon Fire TV Stick or Google Chromecast but, by significantly undercutting their price, the Now TV Smart Stick has carved its own niche in the market.

Approximately the size of a USB stick with an HDMI connection at its business end, the Smart Stick should fit discreetly into the back or side of any television. It’s powered by a micro-USB connection, with a space-saving L-shaped cable in the box.

It bears a striking resemblance to the Roku Streaming Stick, but that is no coincidence. The Now TV Smart Stick is built by Roku using the same hard- and software, but with a few tweaks to prioritise Sky content.

The remote looks similar too, with the main change being the four buttons on the bottom which direct you to different parts of the Now TV interface.

‘My TV’ shows the movies and programmes you’re currently watching across the range of Sky channels. If you’ve been viewing on another app, it won’t be shown here.

The Sky Store, meanwhile, is the place to rent or buy movies and shows not included in the regular service. Many of these will be concurrent with, or even prior to, the DVD and Blu-ray release.

One nice feature is the volume control on the right side of the remote, which is absent on non-Roku devices. This means you can have a more complete experience using just one remote, rather than having to switch to your TV’s own zapper should you wish to adjust volume.

However, as it only works with your television, those with connected AV receivers or soundbars will still have to use a second remote to control their sound.

There’s also a button in the middle for voice search, which allows you to search for content by actor, director, genre, and so on. It is limited in usefulness by only showing catch-up content from Sky – and not including live programmes either.

On the whole, the Now TV Smart Stick provides a good user experience. It’s not quite as responsive as the Amazon Fire TV Stick or even Now TV's own Smart Box when it comes to menu navigation, but you aren’t left waiting long for content.

To use the Now TV Smart Stick, even for its free catch-up apps, you will need a Now TV subscription - there is a free trial, which can immediately be cancelled once the device is activated. In contrast to a Netflix or Amazon Prime subscription, though, which gives you a range of content for a set price, Now TV is split into four genres: Entertainment, Cinema, Kids, and Sports.

An Entertainment pass costs £8 per month, the Cinema pass is £10pm, and the Kids pass £4pm. A Sports pass is more complex: one day of access to Sky’s content costs £8, a week of access is £13, while a month costs £34.

The £15 we're quoting is the cost of the Stick itself, but it can be bought in a number of bundles that include a pass for a discounted price. A Stick with two months of Entertainment is £20, for example, whereas a bundle that includes a month of Sports is £30.

Once that's done the Now TV Smart Stick provides a more streamlined experience than any other device with dedicated, downloadable apps.

Instead of having to go to the app store to download services, as you do on the Amazon Fire TV Stick, this stick uses the postcode linked to your Now TV account to automatically download the apps you need, including BBC iPlayer, ITV Hub, All 4, Demand 5, and YouTube.

Netflix has recently been added to the app selection, but many other common apps are still missing, including Amazon Prime Video. In total, the number of apps available via the Now TV Smart Stick (and the sibling Smart Box) is limited to around 50. By comparison, a normal Roku device has over 4000, including the likes of Spotify and Tidal (both of which are also absent here).

While third-party applications such as Netflix and BBC iPlayer are able to stream at 1080p via the Smart Stick (Netflix is 4K on the Smart Box), Sky content is limited to 720p.

Now TV has long been talking about an upgrade of Sky content to 1080p, but the latest we have from the company pegs that only to a vague 2019 release. In the meantime your television will be doing more work to upscale the content to a Full HD or 4K picture, and it won’t be as sophisticated as those found on 1080p native streams.

Nevertheless, playing Inside No.9 - To Have and To Hold (at 1080p) through the iPlayer app provides a detailed picture beyond what we expect from hardware in this price range.

There’s a good rendition of the wisps of hair on Steve Pemberton’s head and the sweat that drips from his brow as the story reaches its tense climax.

The Now TV Smart Stick handles the domestic, brightly-lit kitchen scenes as well as it does the red-tinted darkness of the basement darkroom too.

We switch to a stream of Atlanta on Sky Atlantic (720p) and the difference in resolution is noticeable, producing a rather soft and flat image overall. However, it’s still perfectly watchable and something you’re unlikely to be bothered by given the price of the device.

We have no major complaints when it comes to sound, either. Like the latest Now TV Smart Box, the Smart Stick supports DTS and Dolby Digital Plus up to 7.1, and the performance is admirable. Bass, treble and midrange are all relatively balanced, and the dynamic change between loud and quiet sounds – tested by playing a range of music on YouTube – is pronounced enough.

Most of the reasons you’d want to buy a Now TV Smart Stick revolve around the price. This is the cheapest way to give an old television streaming service smarts, if you don’t mind signing up for a trial Now TV subscription.

It’s also the cheapest way to watch Now TV on a television that doesn’t already have it – the Now TV app is included in the operating system of some LG and Samsung smart TVs.

Essentially, the purpose of the Now TV Smart Stick is to give you inexpensive subscription-free access to Sky content.

While there are certainly improvements to be made, particularly as we wait for native 1080p streaming, we can’t deny the streaming stick achieves its specific mission.

Read all our NOW TV reviews