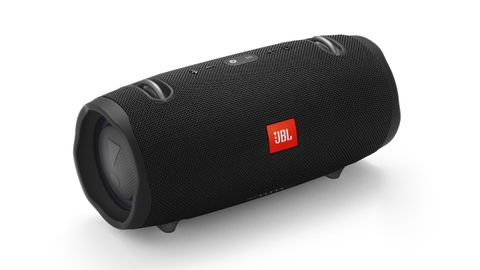 One of the best portable speakers around, the Xtreme 2 offers sonic subtlety you wouldn’t expect from first impressions

On first sight, the JBL Xtreme 2 seems a little brash and out of place – an unashamed boombox in an era of reserved smart speakers dressed in grey fabric.

However, this bold and aggressive look is matched by some of the sweetest sound you’ll hear from a portable speaker. In fact, it’s fair to say that, unless you bought one expecting bass as brazen as its initial appearance, the JBL Xtreme 2 comes as a pleasant surprise.

The JBL Xtreme 2 is a big boombox wireless speaker. It’s slightly larger than the original Xtreme, but you’d have to put them side-by-side to notice the difference. Too large to stash in airline hand luggage for weekend breaks, and perhaps too bold for some living rooms, JBL has not gone for crowd-pleasing neutrality here.

Its functional focus is as specific as the visual design, though. The JBL Xtreme 2 is a large portable speaker, and it does that job perfectly. Its fabric grille and chunky rubber port cover on the back provide IPX7 water resistance, enough to survive a dip in 1.5m depth of water.

The strap, while odd looking, is functionally great too. A pair of carabiners hook a miniature car seat belt onto the Xtreme 2’s top. It’s a shoulder strap, with a little extra padding should you need to take the speaker further afield.

One of its closest portable rivals, Harman Kardon's Go + Play 2, certainly looks classier. But if we had to choose which one we’d rather take on a hike across a field, it would be the JBL Xtreme 2.

Wireless features have been stripped-back here. The JBL Xtreme 2 won’t let you talk to Alexa or Google Assistant, just set a button to activate them in the manner of an earphone’s in-line remote. It doesn’t have wi-fi, and therefore can’t stream directly from Spotify.

JBL Connect+ is the only unusual extra feature of this otherwise standard Bluetooth speaker. This lets you link up to 100 JBL speakers, to make the equivalent of a nightclub PA in your home. It sounds interesting on paper, but it’s difficult enough to imagine anyone buying two JBL Xtreme 2s, let alone 100.

There’s a five dot LED battery indicator on the speaker’s underside, which allows the Xtreme 2 to function as a power bank for your phone via its USB port. It has a 10,000mAh battery inside, providing enough charge for up to 15 hours playback.

The JBL Xtreme 2 is a rough and tumble speaker, and the design suggests it will have the bass response to match. As in some smaller JBL models, each side of the Xtreme 2 is a passive radiator that amplifies the bass output.

The highly visible passive radiators may give the Xtreme 2 an aggressive look, but its sound is anything but. Bass is deep and reasonably powerful, but also controlled, measured and coherent.

JBL’s tuning is remarkably tasteful, something that can be heard throughout the sound. The mids have surprising fidelity, treble is clean and clear, with only the slightest hint of granularity that is no surprise in a speaker at this level.

The Xtreme 2’s impressive stereo imaging highlights JBL’s aim of providing great audio, pure and simple. This speaker sounds much more refined and delicate than it looks, without going too far and creating a bass-light tone.

Just don’t expect the kind of oversized bass that might seem a natural fit for a boombox. While the Xtreme 2 extends down to the upper 55Hz sub-bass region for realistic-sounding kick drums and bass drops, that kind of juvenile excess just isn’t here. It’s true that some people want that from a wireless speaker, but what you get here is much better.

The JBL Xtreme 2 is not what it seems. Often that means a product is worse than expected, but this time it’s a pleasant surprise.

This is a portable boombox speaker with JBL’s signature side-loaded passive radiators. Every inch of it screams ‘big bass’, but the sound is far more measured and refined. The bass is deep, but controlled and balanced, meshing perfectly with clear mids and crisp treble. If features such as smart assistant support and multi-room audio are not a must, the JBL Xtreme 2 is a top buy.

Read all our JBL reviews