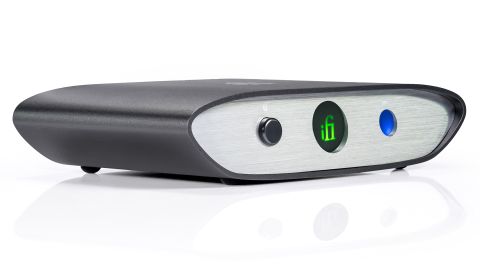 If you want to add Bluetooth connectivity to your system buy the Zen Blue. You won’t regret it

Want an easy way to add Bluetooth connectivity to your traditional stereo system? Just buy iFi’s new Zen Blue. While there are a number of cheaper Bluetooth receivers already on the market, this is one of a handful that puts a priority on good sound.

It’s a really nicely built unit that takes up less shelf space than a typical paperback. We were expecting a moulded plastic box, but what we get is a quality aluminium casing that’s finished to a far higher standard than the price suggests.

That impression of substance is reinforced when we take a look inside. The Zen Blue uses a premium Qualcomm QCC5100 ‘system on a chip’ Bluetooth solution. But, rather than using the Qualcomm’s internal digital-to-analogue conversion abilities, it pipes the digital data stream into an ESS Sabre DAC for improved performance.

Once converted to analogue, this signal is fed into a balanced output stage, something that is unusual at this price level.

The company’s engineers have tried to make the Zen as accommodating as possible, so it accepts a wide range of Bluetooth codecs including aptX HD, AAC and Sony’s LDAC.

While there’s cross-compatibility between Bluetooth types, iFi is trying to make the most of any signal the Zen receives.

Alongside the expected stereo RCAs, the Blue also offers a balanced 4.4mm Pentaconn analogue output, as well as optical and coax digital alternatives. There’s a small switch on the back panel that swaps between the analogue and digital outputs.

It only takes a minute to get the iFi going. Simply fit the screw-on Bluetooth aerial, plug-in the 5v mains power supply and pair with your Bluetooth device. We connected to both an iPhone X and an Apple MacBook Pro without issue.

The Zen Blue delivers a fine sound regardless of whether we play REM’s Automatic For The People, Tchaikovsky’s Romeo & Juliet or Four Tet’s Rounds. Detail levels are good, as is the way the unit organises all that information. We’re pleased with the level of composure too, with the Zen refusing to sound stressed when the music gets dense and demanding.

Bluetooth usually sounds compressed, but even here the iFi delivers more dynamic variance and expression than we would expect for the money. There’s a good sense of openness to the recordings and pleasing stability to the sound stage.

If you’ve already got a good DAC, it makes sense to try that with the Zen Blue. While it’s obvious that the iFi’s internal DAC is capable, connect the unit to something like Audiolab’s M-DAC and the sound quality takes a significant lift, just as it should bearing in mind the price differences. Adding an outboard DAC is an obvious upgrade for the future.

The Zen Blue is a terrific product. It’s sensibly priced, carefully specified and sounds good. What’s not to like?