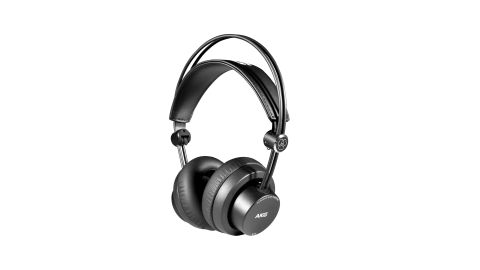 AKG has produced a solid pair of studio headphones with an engaging sound, though they occasionally stray a little towards the aggressive

The AKG K175s are £100 on-ear headphones that raise a question: what’s the difference between a pair of professional studio headphones and one made for people who just want to listen to music on the way to work?

In some ways, the AKG K175s seem perfect for casual use. They look good, they don’t cost the earth and they have a punchy enthusiasm you might not expect from a studio monitor pair.

A few design elements should make you think twice, though, and while it's engaging, the sound’s up-front presentation and uncompromising midrange will start to wear after a while.

There are a few obvious signs that the AKG K175s aren’t really made for life on the train, and the job of making your commute marginally less miserable. They come with a thick, coiled cable rather than the usual straight type, which weighs heavily as you walk around wearing them.

In a home studio environment, the coil means the cable isn’t left dangling to be run over by chair coaster wheels, and if you snag it against the corner of a mixer or a mic stand, the cable simply stretches out.

The AKG K175s’ cable connector is much chunkier than that of a consumer pair and it has a locking mechanism to avoid being pulled out. It uses a standard mini XLR socket, so you can replace the cable if you don’t get on with the coiled style, but only the one cable is included.

The pro-style cable won’t stop you from using the AKG K175s though. It ends with a 3.5mm jack, and a screw-on 6.3mm adapter is also included.

The second, and arguably more significant, barrier to commuter use is the amount of isolation. The AKG K175s don’t block out a great deal of sound – wear them on a busy street and you’ll hear plenty of noise. They’ll struggle to compete in a noisy train. Leakage is minimal, though, making the K175s fine to use in an office environment.

The headband style is typical of AKG’s pro headphones. It uses hammock-like padding that automatically stretches to match the size and shape of your head.

Like most on-ear headphones that make a concerted effort to stay in place, the AKG K175s exert a little pressure on your ears. If you wear glasses, you may start to feel a little discomfort after a while.

However, the only notable comfort issues these headphones cause is a pressure point at the top of your head, noticeable when wearing them for longer periods. Still, these are relatively minor issues that affect many pairs of on-ear headphones.

Other areas of the design are influenced by mainstream trends. The outer parts of the cups are aluminium rather than plastic, as are the ingots that attach the headband padding to the headband skeleton, complete with bright beveled edges. The AKG K175s also have fold-in cups, although no case or bag is included.

A flat, neutral and uncoloured sound is what you expect from a studio monitor headphone, but that isn’t the AKG way – an upfront presentation characterises their sound. They have a real ability to make vocals sound close to the ear.

It helps when playing bands with a certain aggression through the K175s. Music is delivered with plenty of energy, good scale for a forward on-ear headphone and a richer tone than a neutral studio monitor.

There is a problem, though. The AKG K175s’ upper-mids are quite raw. Like a drunk telling tales down the pub, these headphones are initially engaging but can start to grate after a while. Their initially appealing aggression devolves into a midrange blare that is not particularly comfortable over long sessions and you may find them a bit much after a while.

However, the K175s don’t have many of the traditional characteristics of a studio headphone either, and in fact, may work better as a DJ pair (they fold up, after all). The lower mids are thick enough to reduce the overall transparency of the sound – which isn’t particularly helpful to anyone attempting to master a track – and the transparency could be better.

On the plus side though, the AKG K175s’ bass is deep and assured, but not overpowering, and doesn’t boom or bleed conspicuously.

In answer to the question about studio headphones versus ones for the commute, the AKGs are neither one nor the other. While they don’t have the obvious flat ‘pro’ profile, they do offer a reasonably entertaining listen for less serious uses – even if they do start to test your resolve after a while.

Read all our AKG reviews