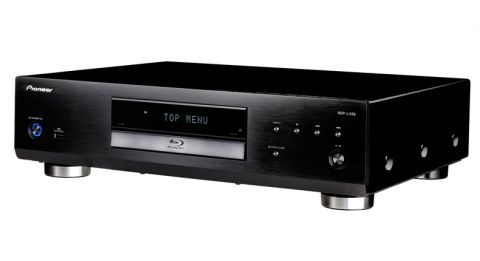 A stellar movie performance, but its stereo performance and lack of streaming apps let it down

It’s been a few years since we’ve seen a reference-grade Blu-ray player from Pioneer – seven in fact – but finally we have a successor to 2008’s five-star BDP-LX91 with the new BDP-LX88.

Of course, the market has changed rather a lot in that time. Blu-ray players have plummeted in price and headline features are dropping further and further down the ranges, meaning you can now pick up an excellent player, such as the Sony BDP-S7200, for just over £200, with £2000 price tags – as the LX91 once had – becoming few and far between these days.

At £1300, the LX88 falls some way under the price tag of its predecessor, but still has a lot to prove at its price. Can it justify the extra spend?

The LX88 is a universal disc player, which means alongside the standard Blu-ray, DVD and CD playback it will also play music from SACDs and DVD-Audio discs. The availability of both is rather limited in comparison to CDs, but their inclusion will suit the audiophile listener that this player is aimed at.

Here, the Pioneer will do enough for most systems. There are two HDMI outs, coaxial and optical outs, both RCA and balanced analogue stereo outputs and two USB ins (one on the front and one on the back).

You won’t find a headphone jack here nor any other digital inputs aside from USB, suggesting the Pioneer intends itself to act as the main source in this set-up. That seems a bit of a shame when the on-board DAC is such a good one.

As it is in the Pioneer, it only deals with the right and left analogue channels, so you’ll only hear its input to proceedings when listening in stereo. Networking is handled by a hardwired LAN connection or via an optional wi-fi dongle, though it has to be said the LX88’s streaming capabilities are a little limited compared with the competition.

When it comes to built-in services, there is only Picasa for photos and YouTube for video, with no Netflix or BBC iPlayer in sight. While it’s likely your amp or TV will offer these services now, it’s still a shame not to see them included here, particularly when they’re found on players a tenth of the price.

Music-wise, the Pioneer supports all the popular file formats, and includes compatibility for DSD 2.8MHz and PCM files up to 24-bit/192kHz, via USB or streamed via DLNA.

The Pioneer iControlAV5 app for iOS and Android is an excellent remote companion, and does a good job at helping you sniff out any music on compatible devices on your network for quick and easy playback through the player.

As you’d expect at this level, the LX88 is fully capable of 3D playback and packs an Ultra HD 4K reference converter for upsampling content to 4K should you wish to use the LX88 to do this job rather than your AV receiver or display.

This means that when the two components are linked together via HDMI, PQLS allows the AV receiver to take control of the Blu-ray player’s digital clock, which, Pioneer says, will eliminate any distortion caused by timing errors during signal transfer – a nice feature for those buying into Pioneer’s wider AV family.

The LX88 unit itself is well built and sturdy, thanks to a chassis made from a mixture of aluminium and steel. The front panel is clean and uncluttered, with the usual smattering of controls for power and playback, a large display and a ‘Direct’ button for the best results when playing back music via the analogue stereo outs.

On-screen menus are a little arbitrary and uninspiring, but unless you’re particularly bothered by pretty graphical interfaces, it won’t be a deal breaker – they’re easily navigated and simple to understand.

The remote, though, is still a little cluttered for our liking, but is backlit so you can at least see the mass of buttons during dark movie sessions.

Load a disc and the LX88 opens and closes almost silently, with no notable noise during playback. There was the occasional handshaking delay during loading, but nothing of too much inconvenience. Once it does get going, it’s hard to fault the Blu-ray performance here.

Lines are precisely etched, textures nicely detailed and colours and skin tones natural and well represented – sitting just on the cooler side of neutral. Motion is handled with confidence and noise levels are very low, though the Pioneer does include a range of 13 video adjustment items in its set-up menu should you wish to tweak things further – from motion to colour to noise – though we never felt the need.

DVD performance shows up similar results, and though there is the expected drop in resolution and the introduction of some minor noise and motion niggles, they’re largely negligible and are a testament to the scaler on board here.

We tried a DVD of 2014’s Robocop and found edges to be crisp, colours natural and enough detail that one member of the team questioned whether we were watching Blu-ray or not.

Landscape shots and busy scenes make it easier to see where the Blu-ray level of detail is lacking, but there are still great levels of insight and subtlety across the board that should mean your old DVD collection needn't be neglected.

When it comes to movie sound, the Pioneer continues to impress, with a precise, detailed presentation. Fight scenes are backed with a taut bass response, and there’s a good sense of impact and solidity to explosions and gunshots.

Voices are expressive and direct, if not always having the power to project that clearly when scenes get busy. What the Pioneer lacks in weight it makes up for in subtlety and precision, with a strong sense of drive and a good handle on dynamics.

Interestingly, we would usually find a player’s stereo performance mirrors the strengths and weaknesses of its movie audio, but we don’t find that to be the case with the LX88, and we can’t help but be a little disappointed by its performance.

Hooking up the LX88 into our reference hi-fi system we hear plenty of detail, and it’s demonstrably better rhythmically than a cheaper Blu-ray player, but it’s not a performance that we’d recommend swapping out for your stand-alone CD player.

Piano notes are a known challenge for digital devices to reproduce naturally, and the LX88 certainly struggles with Debussy’s Clair De Lune, which sounds rather hard and bright.

Switch it up to Stevie Wonder’s Pastime Paradise, and while there is plenty of detail here, the recording loses its elegance, sounding a little coarse and lacking the refinement and dynamic handling we crave.

It’s a shame and it’s largely this performance that loses the Pioneer its fifth star, especially when combined with its lofty price tag.

If you’re largely concerned with movie performance, you’ll find little to fault here, but at this price we need more for the full five.