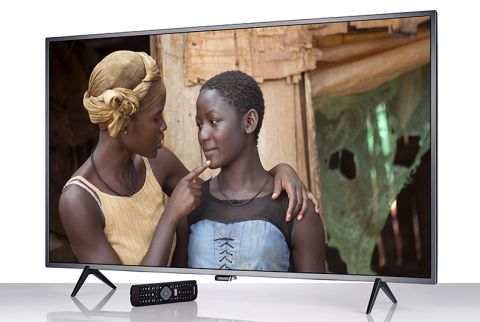 If you love Ambilight, 4K and HDR, this well-priced 49in Philips will impress you with its talents

How much screen technology can you pack into a £500 TV? If you’re Philips, you say: as much as possible.

With Ultra HD 4K resolution (four times that of Blu-ray), high dynamic range (HDR) and its unique Ambilight feature, the Philips 49PUS6401 boasts the best of screen technology you can find this year, and all for just £500.

This set has HDR capability, though peak brightness is restricted to 400 nits on this budget panel, rather than going up to 1000 nits as it does on some premium sets.

We play a 4K disc of Mad Max: Fury Road, and the Philips dazzles us with oodles of detail and bright, punchy colours. The texture of sand pops out of the 49in screen, and the dust, rust and grit on cars are beautifully textured.

You can almost feel the rough edges of objects, which are crisply etched and look mighty impressive when searing your eyes with the rusty desert-scape. We’d tone down the sharpness just a touch to make it a bit less in-your-face, though.

Colours are a tad overblown too. We don’t want to dial it down too far so you lose the Philips’s natural vibrancy, but you get the sense that the picture is more saturated than it should be.

Blue skies are unrealistically deep, fires look too intense, and wastelands really shouldn’t be that colourful.

That effusive quality comes through when watching The Lady in the Van in DVD. It’s just on the right side of colourful, though, as skin tones don’t look unrealistic, nor do the neat houses look artificial.

Black levels could be deeper and more insightful. We play Star Wars: The Force Awakens on Blu-ray and it looks good when upscaled to the 4K screen.

There’s a decent amount of depth, but more variation and intensity would let us see more in dark scenes, such as inside the TIE fighter when Finn and Poe make their escape.

Some detail gets lost in shadowy corners, but the punchiness of bright whites come through: chrome is shiny, fires burst with intensity and stars twinkle against deep space.

You get the same characteristics when streaming Daredevil in 4K (but not HDR) over Netflix.

Daredevil’s gloomy setting pushes the Philips’s boundaries when it comes to dark detail, where insight is needed more than ever. It also exposes some uneven backlighting on the panel, especially in the top left corner of our screen, but it’s not strong enough to distract us from the main picture.

The picture’s strong contrast and sharp detail keeps things exciting, though. Philips’s labyrinthine menu navigation hasn’t changed, and for any newcomers, it can be a bit of chore to tweak picture settings.

Once you’ve explored all the options, we’d recommend fine-tuning the picture using a THX Optimizer disc. We usually start by turning all additional enhancements off, and then slowly work through the options.

It’s worth setting natural motion to ‘minimum’ to smooth over some blurring and juddering.

The 49PUS6401’s own speakers are rather on the thin side, but that’s to be expected from a fairly slim, budget TV.

It’s not grating or bright to listen to, though, and there’s enough detail and clarity that you can comfortably watch the news or sitcoms through the Philips TV alone.

Voices are clear enough to hear the whispered dialogue in Daredevil, although ideally we’d like a more solid and nuanced sound.

We’ll admit: we’re quite smitten with Ambilight. One of the hallmarks of a Philips TV, the 49PUS6401 features two-sided Ambilight, which it goes a long way towards making this set an appealing buy.

Of course, you can turn Ambilight off when you don’t want it, or leave it in a one-colour ‘lounge’ mode. Ambilight isn’t a necessary feature by any means, but it just doesn’t feel like a Philips TV without the light show.

The Ambilight LEDs are hidden behind the Philips’s sturdy frame, which isn’t quite as slim as recent flatscreen TVs we’ve seen. It’s not noticeable from the front though.

There’s a silver bezel surrounding the smart 49in screen, although this is barely visible when Ambilight is in play.

The well-built set is propped on two aluminium feet (Philips calls them ‘pinch stands’) that aren’t too far apart, meaning the set should fit on to most TV racks.

The remote supplied with the TV is a standard button wand that feels nice in hand.

There’s no backlighting, but the buttons are prominent enough that you can use it in the dark.

It’s responsive, but can be a touch slow, and you often have to press the remote’s buttons a second time, and point it directly at the TV’s sensor to register the click. This can get frustrating over time when you just want the TV to work intuitively.

The 49in Philips’s smart portal is powered by Google’s Android TV (currently on version 5.1 Lollipop), and the neat, single-page interface is simple to navigate around.

The home page starts with app and content recommendations from Philips (updated as you use the TV). Scroll down further and you’ll find more useful content: streaming apps such as Netflix, YouTube, Wuaki.tv, Deezer and more.

You can connect the TV to your network using wi-fi, but we would recommend hardwiring using the ethernet port to ensure you get the full 4K resolution when streaming from Netflix.

For catch-up TV Philips provides BBC iPlayer, and although Amazon Video wasn't present at the time of our review, we've been assured by Philips it is now available. Being an Android TV, you also have access to the Google Play Store.

In contrast, the Finlux 48UXE304B-P’s inclusion of Freeview Play gives you access to all five catch-up services and the ability to roll back the programme guide.

MORE: Freeview Play – What is it? How can you get it?

Around the back of the telly, you’ll find a generous spread of connections.

There are four HDMI inputs, all of which support ARC (Audio Return Channel).

Only the two on the rear panel (HDMI 1 and 2) adhere to the HDCP2.2 standard for full 4K HDR playback at 60fps. Those are the ones you’ll want to plug your 4K Blu-ray player into.

The Philips 49PUS6401 isn’t a perfect TV – the limited streaming features, the larger-than-life colour balance, and the hints of patchy backlighting stop it from getting the full five stars.

But it sure is an exciting one. The punchy, vivid palette is a preferable balance to a dull one, especially when watching 4K content that dazzles thanks to the Philips screen’s detail and intensity.

A 4K HDR screen in this size, for such an appealing price, with the added fun of Ambilight makes the 49PUS6401 a TV well worth looking out for.