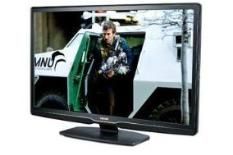 This a premium product, for sure, but the cheaper Philips 47PFL7404 offers a performance that's too close for comfort

Although this range-topping Philips didn't win an Award this year, it did receive a five star verdict in its First Test. You'll have spotted that it's already down to four stars.

Philips is likely to be a bit upset by that, but in fairness, the company's really done it to itself by offering a cheaper TV with a similar level of performance – the Philips 47PFL7404 at £1200.

The use of the word 'similar', rather than 'identical', is important, though, because the 47PFL9664 is undoubtedly the more accomplished set.

Superb three-dimensional image
There's just a touch more detail here, too, and considering how accomplished the '7404 is in this regard, that adds up to brilliantly insightful pictures.

Add sharp edges and depth-enhancing Ambilight and you've got a superbly three-dimensional image. The extra detail and punch is more evident when playing a DVD, with Hugh Jackman's checked shirts appearing more textured and realistic on the Australia disc.

It's more subtle and convincing all-round , even if the margin still isn't huge.

Where the '9664 does significantly trump its '7404 sibling, and in fact virtually all its rivals, is in its audio performance. The Philips' speakers project sound really impressively, producing a direct, immediate performance.

Balance is good, with surprising bass extension, snappy treble and clear midrange. It's surprisingly punchy and controlled for a telly.

Only slight improvements for the money
Yet, we can't help but be disappointed by the slightness of the majority of improvements over its sibling.

Detail levels are only a little higher; motion is remarkably similar considering the refresh rate has been doubled to 200Hz. The Freeview picture is only slightly better, too.

Of course, there are lots of specs to take into consideration: there's Ambilight, built-in wi-fi for accessing your network and Philips' Net TV widget system.

These features may be enough to sway some people to fork out the extra cash, but for most we suspect the 47PFL7404 will do enough.